Free and Legal Downloads? Yes, at least temporarily. Bands often temporarily permit free downloads of their releases.  The end of an offer may be based on the expiration of a set period of time or on a limited number of downloads.  But at least for now, here are songs that qualify as Free, Legal and Recommended (FL&R) downloads.
Finding songs that can be legally downloaded is easy. The difficult task is to find legally downloadable music that we recommend. Our plan is to post at least one FL&R song each Friday/Saturday. In this post, we venture from our genre and geographical comfort zones. 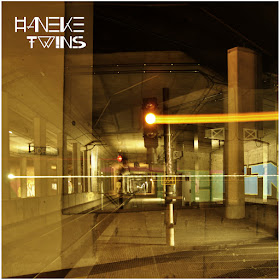 Haneke Twins are Stefanos Leontsinis (guitars) and Paschalis Vichoudis (vocals, bass) in Geneva, Switzerland. The lyrics of their song “Climb” are based on the poem "Arctic Mountain" by Stathis Antoniou  For the song, drums are provided by Kostas Zabos, and the album cover photo is by Menno de Groot.

Lyrics of “Climb” by Haneke Twins
Snow melts under the summer sun,
Little white brushes remain
The rest merges with dirty rivers
And it’s washed away

To understand, you need to climb it,
March on its black rocks, see its gaze
Feel its immensity step by step;
Hear how the wind breaks its silence

Reach the top place a stone in a pile of stones;
This is you saying, “I climbed it”
This is you growing the mountain by one stone,
Preserving the top for next climbers

To understand, you need to climb it,
March on its black rocks, see its gaze
Feel its immensity step by step;
Hear how the wind breaks its silence

Look down at where you were,
How could such vastness be covered by little steps? 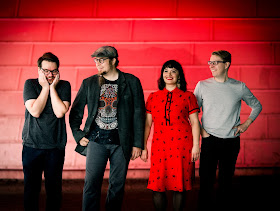 Skinjobs are a quartet from Helsinki, Finland. They are Katja Laaksonen (vocals, keyboards), Arto Alho (guitars), Ville Leino (bass, keyboards), and Antti Lustila (drums). Quoting the press material:
Skinjobs' brand new single “Rachael” is out. With cinematic sounds and siren-like vocals, the song is a love story and a dystopian nightmare inspired by The Handmaid's Tale and Blade Runner. All the band's songs are written by singer-songwriter Katja Laaksonen. Her vocal style has been compared to Kate Bush and Bat For Lashes. The band's atmospheric sound and stories are influenced by New Wave, feminist literature, and Britpop.