From Australia via the Mailbox

We’re not sure what we did to deserve this. Whatever it was, we wanna repeat it. Recently, the Indie Obsessive mailbox has been receiving very strong submissions from Australian artists. The latest are from Husband and Mammals. 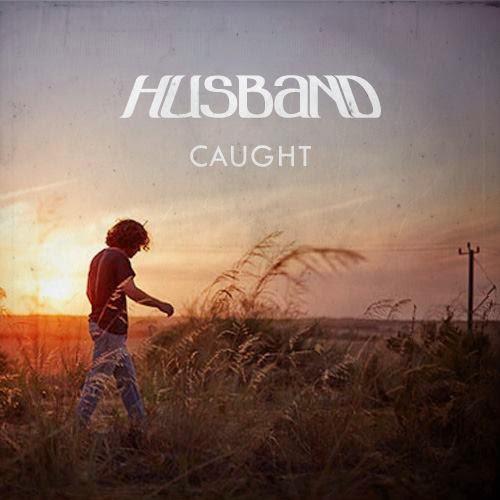 Husband is primarily Michael Paolino, but the Facebook page also identifies Seb Kane (bass), Darrell Sundai (drums), Anneke de Rooij (keys) and Connor Gamble (guitar) as contributors. The song “Caught” is the first single from the debut album to be released in late 2014. Much of the work on the ten-track album took place in Los Angeles, where Paolino cooperated with producer Rick Parker. For the song "Caught," in addition to the baritone vocals, Paolino played the guitar, bass, piano and organ.
Husband is based in Perth, Australia, In addition to "Caught," two songs from a 2011 EP are included below.
"Caught" by Husband 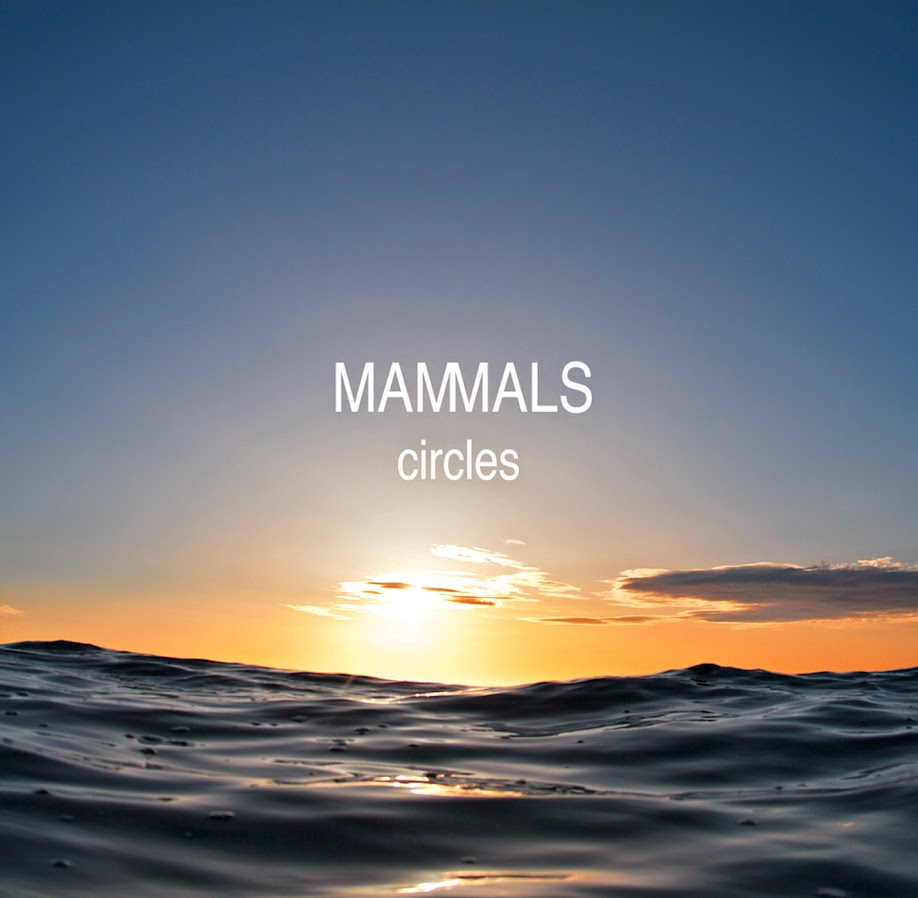 Mammals is the performance name of Guy Brown of Sydney, Australia. According to the email invitation to consider his song “Circles,” it is the first single from his forthcoming EP “Anamalia,” which will be released July 18.
Mammals identifies “Circles” as being “flowing Indie Chill.” Since there is a relaxation that comes with listening to the song, even during the guitar-focused portion that starts at the one-minute mark of “Circles,” we agree.
"Circles" by Mammals


Facebook: https://www.facebook.com/Mammmals
Bandcamp: http://mammalsmusic.bandcamp.com/
Posted by D & d at 9:44 AM No comments: 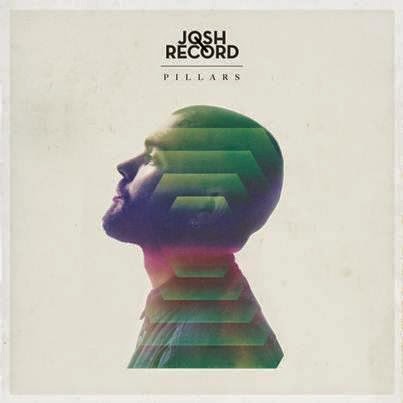 OK, this is embarrassing. We bumped into the song “Wide Awake” by Josh Record and enjoyed it with the first listen. The song is artistically arranged and produced. The voice is pure and the song’s message is well articulated. Over the following two days, we listened to “Wide Awake” a number of times and the attraction to the song grew stronger.
So, the decision was made to find out more about Josh Record and his other material. Using one of the Internet search engines, we inserted “Josh Record” and “singer/songwriter” into the search field. Among the search results was a link to a post at Indie Obsessive. What??? Sure enough, we wrote a blog post in July 2013 about the Josh Record song “The War.” After going to the post, it all became clear, but….
We apologize Josh. It will not happen again.

"Josh Record is a singer/songwriter based in London (technically, Brixton). Somehow, this guy is able to bring a given set of speakers, headphones or ear buds to a level of fidelity that previously did not seem possible from that set. It is fair to refer to his recordings as being "produced," but it is not to the point that the song itself becomes secondary. The lyrics are intelligible over the production (and the lyrics are intelligent). Josh Record's voice is pure enough that the higher fidelity certainly works in his favor. His music has gained traction in Europe, but the North American continent is lagging in the awareness of Josh Record."


“The War” by Josh Record

Die Antwoord at the Fillmore – A Concert Review 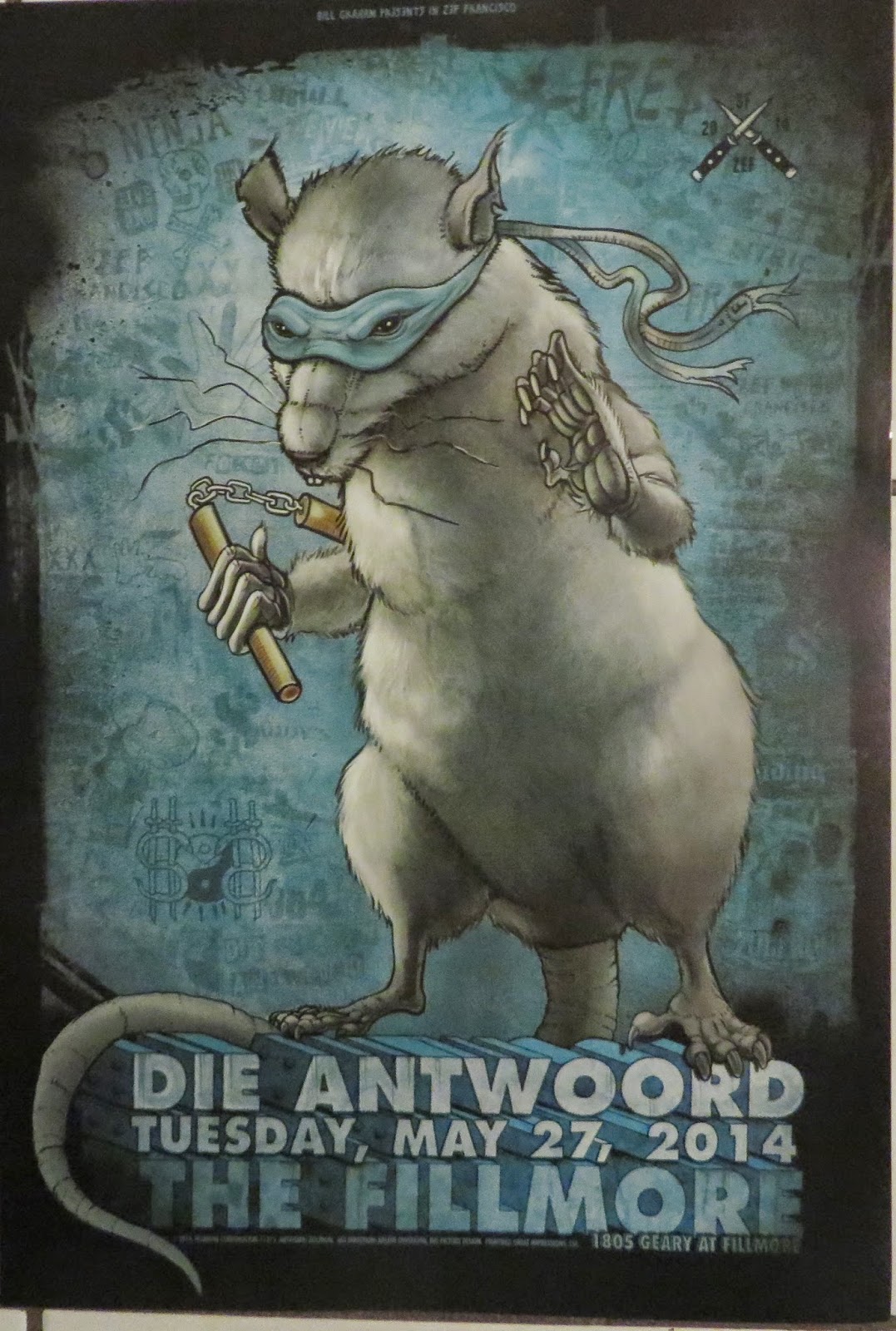 The South African rap band Die Antwoord (Afrikaans for "The Answer") rolled into the Fillmore last night. It was a spectacle. Despite having a setlist that has undergone only minimal change since 2012, their show was an instant sellout and the ticket resale value was significantly greater than the norm (the face value was $30 plus the “convenience” fee of $12, while the Stubhub resale cost was around $120).
The word for the night was “odd,” as in "out of the ordinary." It was odd that there wasn’t an opening band. Typically, shows at the Fillmore have at least one opening band. And typically, if a concert at some venue has only one performer, that performer has a long setlist, rather than the standard fifteen to twenty songs. Our best recollection of last night’s setlist is pasted below. 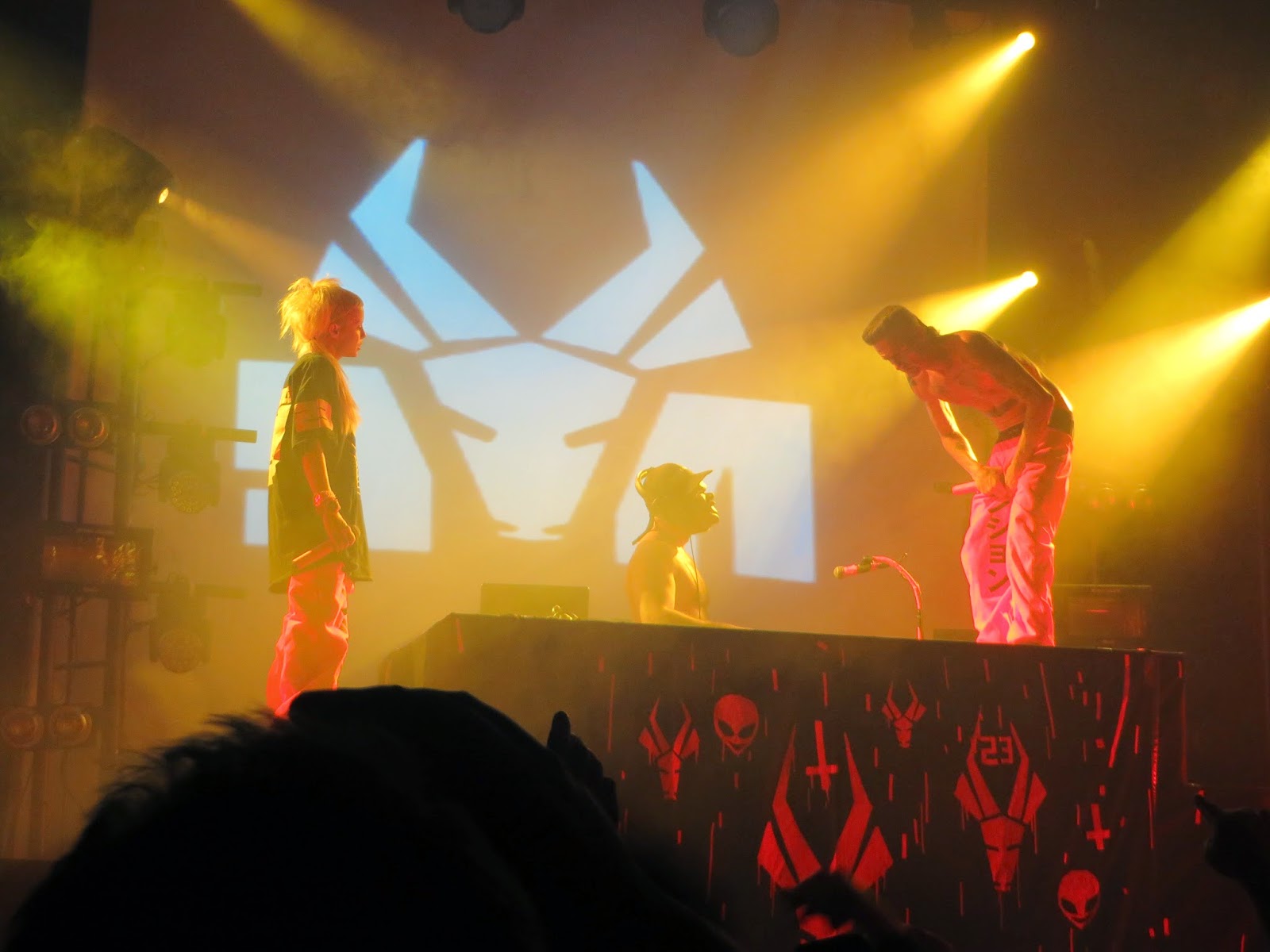 It was odd that a band that is about to release a new album ("Donker Mag" drops on June 3) relied so heavily on its older material. No complaints, since the established songs were the ones the attendees wanted to hear. It was just odd that Die Antwoord didn’t take the opportunity to promote the upcoming album more.
And the mixture of concert-goers was odd. There were people dressed appropriately for a performance by an ex-American Idol performer, and an equal number of people who appeared to have arrived from some exotic part of the music world (or elsewhere). In this post, we embedded some pictures from last night. But it would have been more interesting to take pictures of attendees as they exited after the performance. 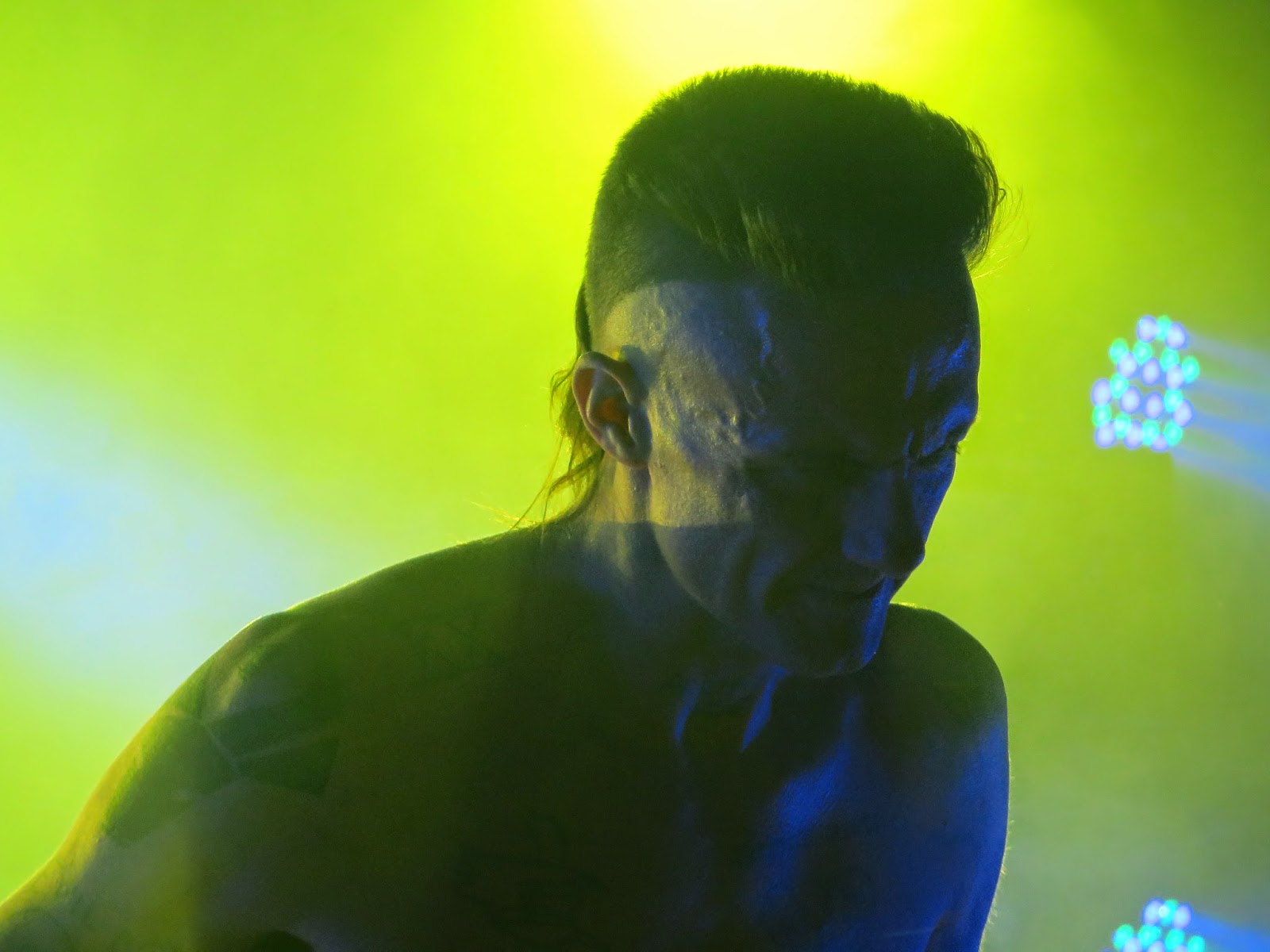 Interestingly, it was not a night of mosh pits. Yes, there were more stranger-to-stranger collisions than usual. Still, the contact was aggressive, but not overly aggressive. The show started late – it was scheduled to begin at 8:00. In actuality, it was a little after 9:00, an extra 45 minutes beyond the fifteen minute delay that is the standard at the Fillmore.

Once the performance began, the journey had very few rest stops. The two main performers are Watkin Tudor Jones (a.k.a. "Ninja") and Anri Du Toit (a.k.a. "Yo-Landi Vi$$er"). The third member is the DJ, who is typically DJ Hi-Tek, but DJ Vuilgeboost steps in during live performances. The focus was on the charismatic Yo-Landi and on Ninja.
Very early in the set, Ninja hurled himself into the attendees with an insufficient amount of warning. While startling, the density of people close to the stage was so great that there was plenty of room for error. That is, Ninja’s weight was easily distributed among a large number of people. Later, Ninja finished a song with a long pause that we assume was intended to allow concert goers to admire his body. Still later, Ninja returned from an offstage trip wearing only shorts having a Pink Floyd "Dark Side of the Moon" theme. He made sure everyone saw them and Yo-landi even mentioned them, but there was no explanation why. They were the same shorts he wore during the 2012 Die Antwoord performance at the Outside Lands Festival. Odd. 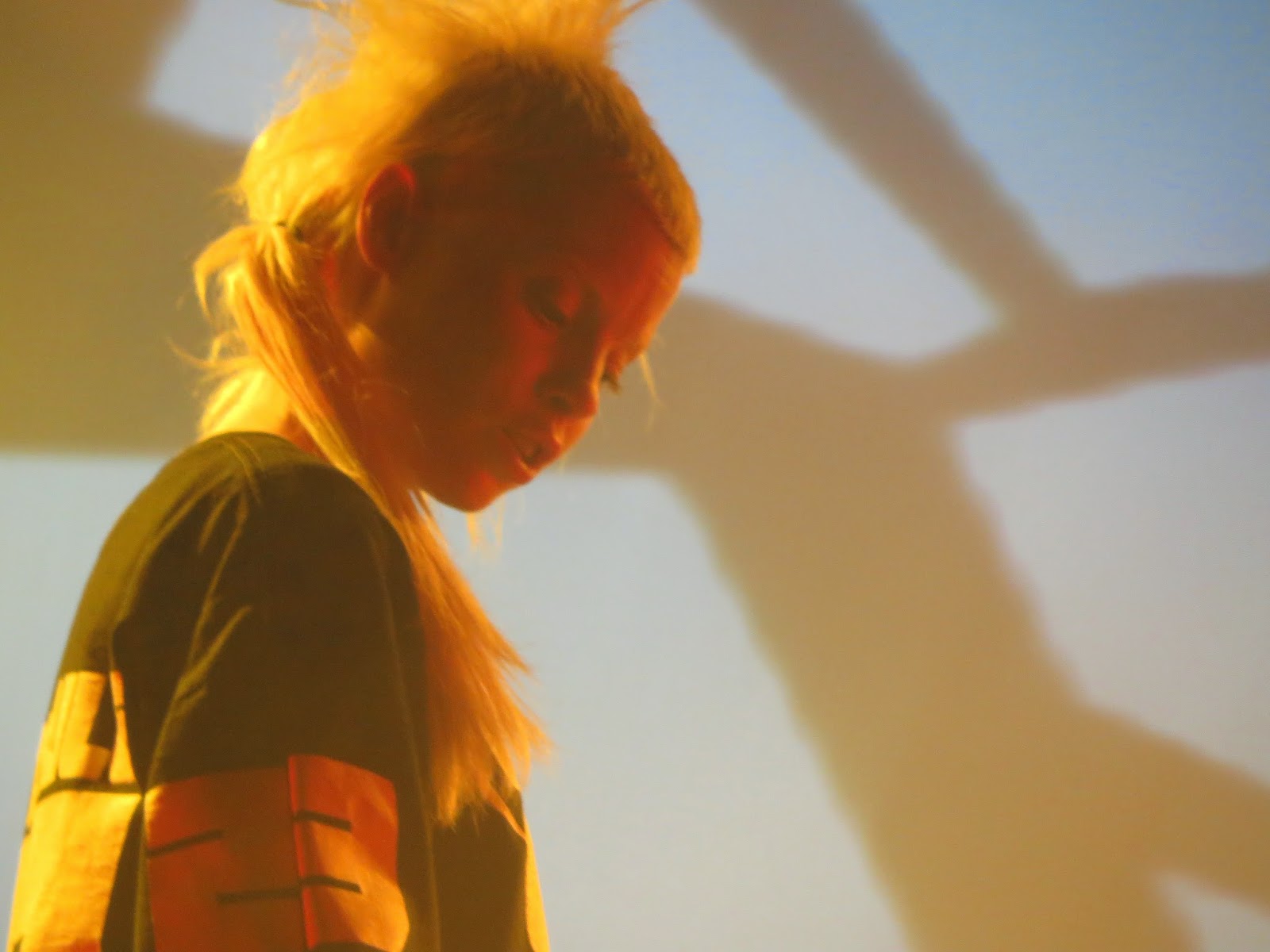 However, while there are plenty of aspects of a Die Antwoord performance that are fairly described as “odd,” it’s Yo-Landi who makes the experience “unique.” She has the appearance of a person in the later part of her teens and the voice of a person in the early part of her teens. Yo-landi doesn’t share her actual age, but the best guesses peg her at about 30 years old. She and Ninja have a daughter (named Sixteen), who is nine year old. Yo-landi is worth the price of admission, even if you pay the Stubhub fee.

Embedded below is a recording of Die Antwoord's 2012 visit to David Letterman, an explicit Soundcloud version of "Baby's on Fire," and the setlist (with some uncertainty). 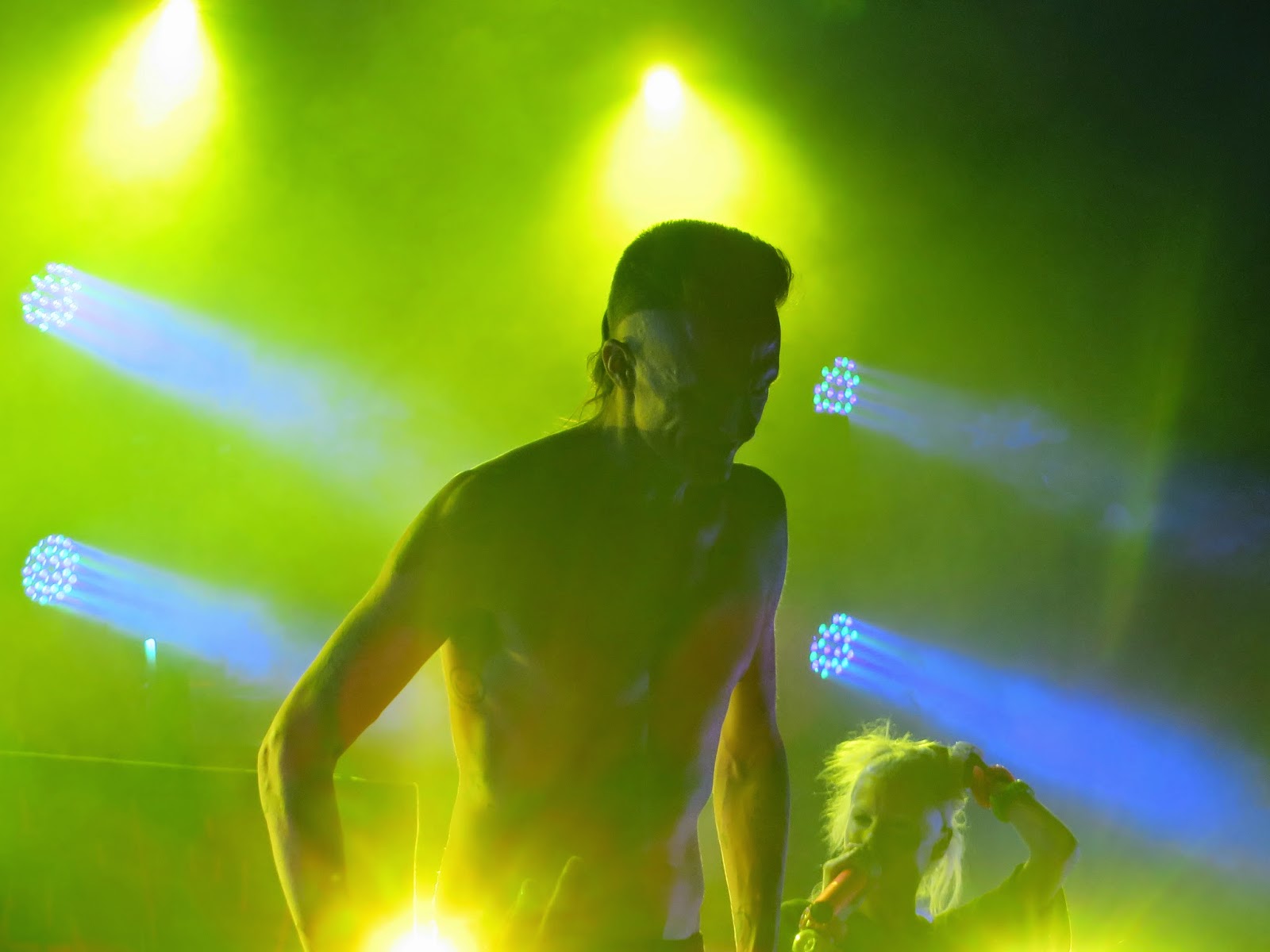 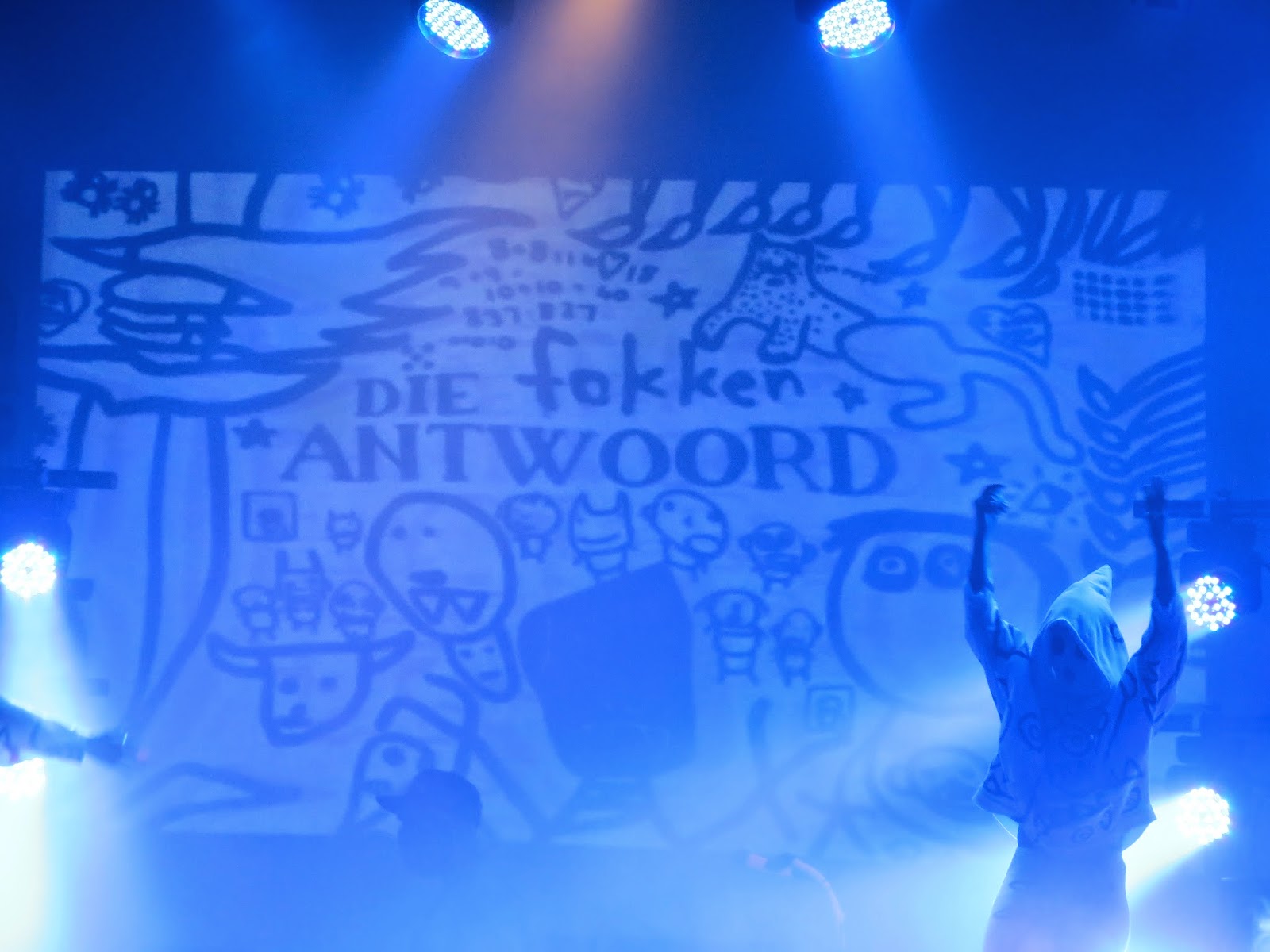 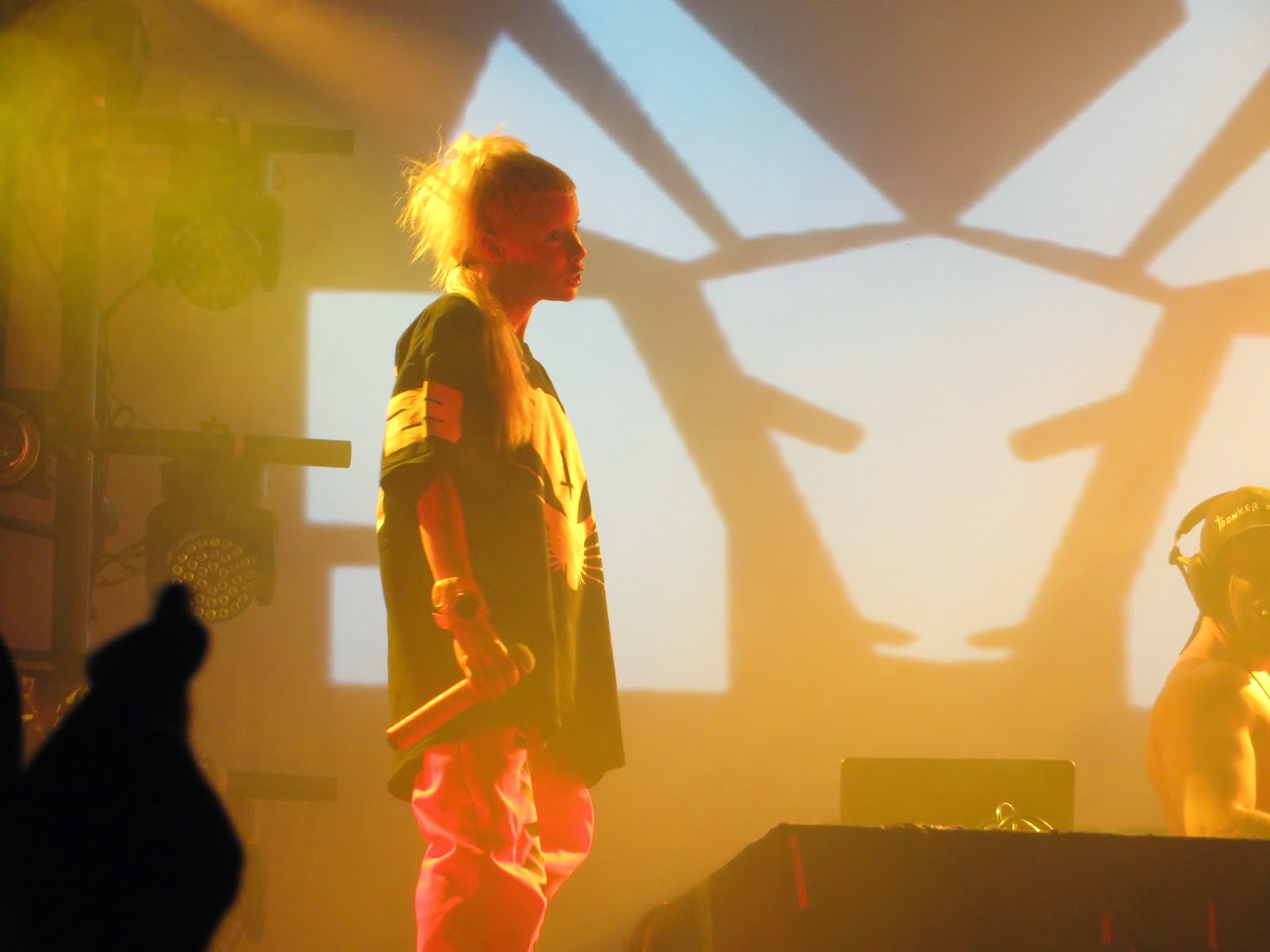 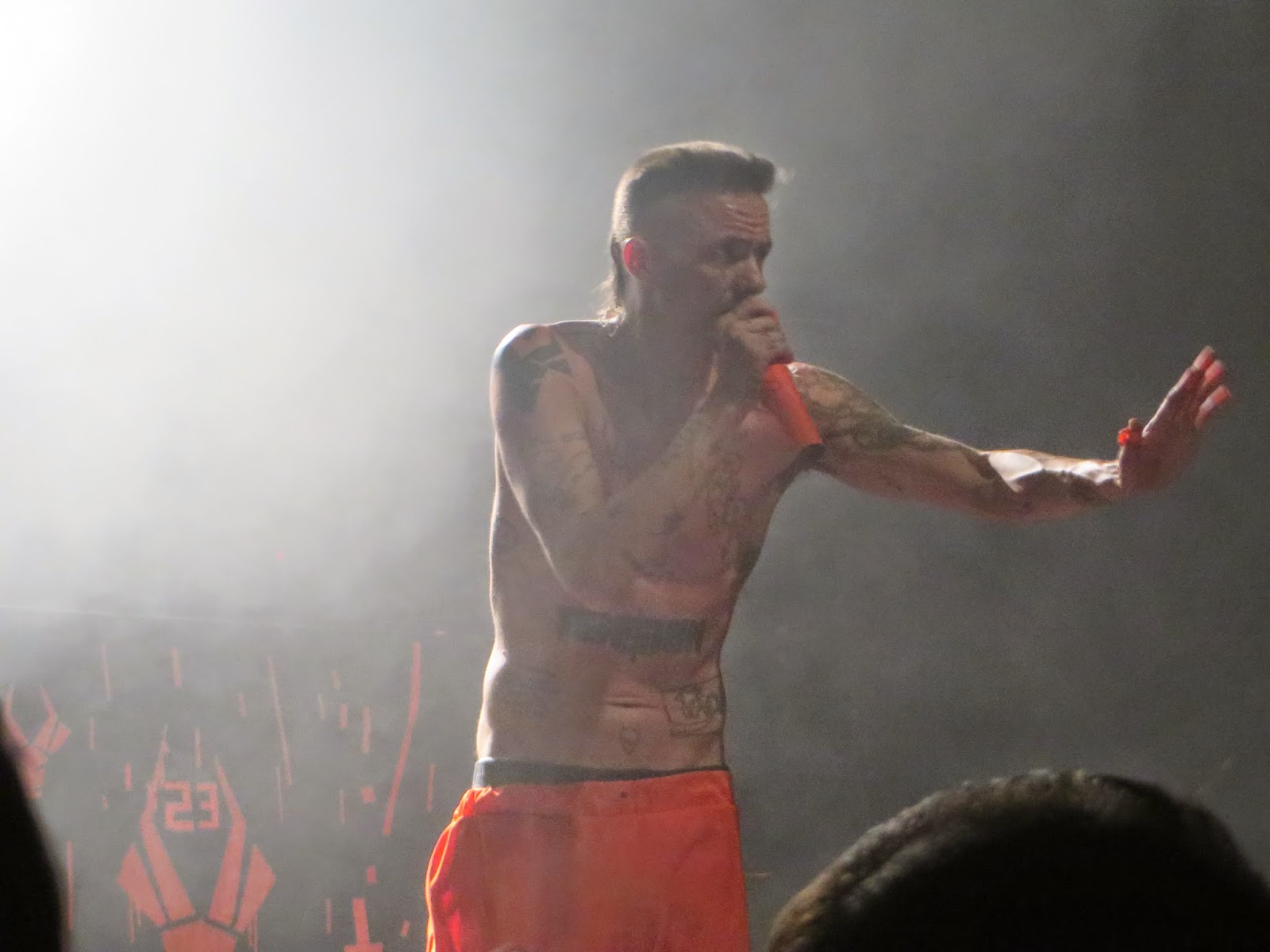 Sometimes, it’s easier to recognize the lack of wisdom in a sentence than it is to act upon the recognition. As an example, when is it wise to start a sentence with the expression “It goes without saying that….?” If it goes without saying, then why mention it?” That said:
It goes without saying that the goal of every band is to surpass expectations with each new release. Not many bands can meet such a goal. But the UK band Amber Run continues to surprise. Reviewing the chronology of their songs available via Soundcloud, the oldest is “Hide & Seek” (a cover of Imogen Heap). It generated some buzz in Europe. The song includes a guitar-driven crescendo that ends with a strong acappella portion (at about 2:47). A short time later, Amber Run dropped a four-track EP (“Noah”), which included the song “Little Ghost.” The song became our favorite by the band, until “Heaven" was released a few months later. ‘Heaven” features some Angels & Airwaves guitar and another acappella portion that has some Bastille-like (Dan Smith) falsetto toward the end of the song.
The most recent release is the single “Spark.” This song has more Rock to it. At the 2:06 mark, the guitar dominates with a passion. It's now our song of choice from Amber Run, but that may change when their next song becomes available.
The members of Amber Run are Will Jones, Tom Sperring, Josh Keogh, Henry Wyeth, and Felix Archer, who met while attending the University in Nottingham.

When there’s time to do so, we enjoy studying a song’s Soundcloud waveform before listening to the music for the first time. Too often, it’s all too apparent that the song is one dimensional, since the top of the waveform is flat-lined. On the other hand, if the amplitude is too choppy, the song typically lacks sufficient melodic flow for us to appreciate the track. Regardless of the waveform, we still listen to the song because there are song characteristics more important than amplitude variation.
There was no temptation to avoid listening to “Ordinary Life” by Lewis Hurrell. The waveform (captured above) shows promise. We added two red arrows at sudden amplitude drops that evidence a multi-dimensional song. And we added two blue arrows at sections of the song with gradual amplitude increases that often are associated with energy swells.
But the waveform did not prepare us for just how strong the song is. No waveform can provide an indication of the quality of the voice(s) or the passion in the vocals. Nor can a waveform telegraph the arrangement of the instruments or their cooperation with the vocals. We favor traditional percussion over the percussive sounds that play an important role in “Ordinary Life,” but the electronically generated percussion does work well in this song. This is a song that deserves attention.

According to his Facebook page:
Lewis Hurrell is an American songwriter/producer from Sebastopol, California. He holds dual citizenship between the U.K. and America as a result of being born in England. After living in the U.K., Australia, and Colorado, Lewis eventually landed in Northern California and spent 10 years there growing up before moving back to the U.K. when he was 22. He helped start the band “Bob Dean” while he lived in Manchester, playing keyboards for them and recording a full album. He also played keyboards for the pop rock group “Mike Moss.”
“Ordinary Life” by Lewis Hurrell (Hurrell is currently allowing free downloads at Soundcloud):


Facebook: https://www.facebook.com/LewisHurrellMusic
Posted by D & d at 1:01 PM No comments: 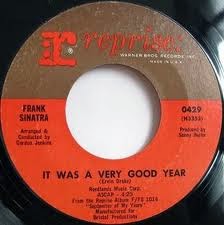