The recording is immersed in processing, while the sensuality is exposed and raw. Chløë Black shared another attention-grabber. With “Waterbed,” she shows that even a nostalgic reflection on time spent in Grunge-obsessed Seattle during the nineties can be given a dark and ominous vibe. Smoldering below the Goth sensibilities is a message of what was important to Chløë at that time.

According to her Facebook presence, Chloe Black’s hometowns are Paris, Sydney, Los Angeles and London. Her “current location" is London.

“The Call” by SUAD – A Song Review 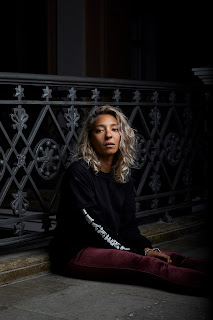 The song maps its own territory; the stake is in the ground and the land is lush. But for the first minute, “The Call” causes us to picture the guitarists of War on Drugs providing support for Elena Tonra (the lead vocalist of Daughter). Probably carrying the picture too far, the start incorporates the strongest features of War on Drugs and a blend of Elena Tonra and fellow Englishwoman Hanna Reid (of London Grammar).

Unlike the two UK vocalists, SUAD’s voice and energy seem best suited for the driving rhythm of “The Call.” The beat remains consistent through most of the track, with instrumental and vocal surges keeping the listener engaged for the full four minutes. The sophistication of the lyrics deserve an assist. Perhaps our understanding is flawed, but well-written lyrics are often subject to personalized understandings. The “call” is a signal for a life change. Things are different; even life’s fogginess “doesn’t look like it did before.”

SUAD is the performance moniker of Suad Khalifa. She is from Helsinki, Finland. “The Call” is the title track from her debut album. Quoting content posted on SubmitHub:
“SUAD is the artist moniker by which Suad Khalifa delivers her combination of atmospheric, melodic yet progressive music. The debut EP 'The Call' is now out worldwide via Playground Music.
Two singles have thus far garnered SUAD praise for her strong and distinctive voice and the driving energy of her music. The Line Of Best Fit proclaimed 'Caves and Blood Veins' with 'SUAD's voice is smoky and warbling, confident but with the slightest hint of vulnerability...a track which divides itself between a motorik groove and Fleetwood Mac-eque riffing.'
Second single 'Blue Sign' meanwhile hit the right notes at Discobelle who stated "The hypnotic and dramatic dark pop masterpiece “Blue Sign” which echoes with blissed out electronica.”

“The Call” by SUAD

Came around the corner I hear the call
It keeps me close, close to the wall
My big loving arms never let me fall
Still, I hear the same, “Take, take the call!”

Last time, I don’t remember it all
So it seems for those involved
It’s cold, the covers are thrown over the wall
Is there a reason to shiver at all?

“All My Life” by Honors – A Song Review

The dynamic vocalization distinguishes “All My Life” from other tracks in the same genre. The song begins with a single voice. When the chorus starts, the backing vocals join. After the chorus, it’s a return to a single voice, but not the same one.

It’s not until the 2:40 mark that Honors introduce the choir. The effect is striking. If a listener isn’t already fully engaged, the entrance of the choir changes that fact.

“All My Life” by Honors

Someone told me, “This is life.”
They asked me how I feel inside
Sunday mornings don't feel right
Hold your own and sleep at night
Sleep at night

Free and Legal Downloads? Yes, at least temporarily. Bands often temporarily permit free downloads of their releases.  The end of an offer may be based on the expiration of a set period of time or on a limited number of downloads.  But at least for now, here are songs that qualify as Free, Legal and Recommended (FL&R) downloads.

Finding songs that can be legally downloaded is easy. The difficult task is to find legally downloadable music that we recommend. Our plan is to post at least one FL&R song each Friday. 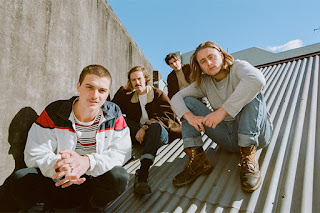 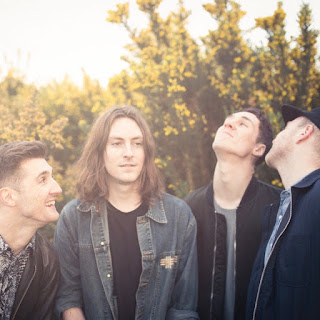 Listening to “Wide Eyed” on repeat, the question was asked, “If Slowlights announced a tour that included a local performance, what same-night concert would prompt us to miss Slowlights?” We were hard pressed to name a band that still has all of its original members (The Beatles and Bob Marley would top all lists, but those appearance aren’t possibilities).

Slowlights make texturing mandatory by raising expectations. That is, listening to a track from the London-based band is unfair to the next band on the playlist, since that next band shouldn’t be expected to match the sophisticated complexity. Slowlights texture and layer without creating a soundscape that is too busy or forced.

“Wide Eyed” begins cinematically. A slow building “hovering” and base line are soon joined by simple, spaced piano chords played with percussive force. The song explosion occurs at the 1:23 mark. The piano leads the explosion, with a major assist from the percussion. The remainder of the track is dynamic, as it follows a path with spectacular features. Perhaps the most interesting feature enters at 1:56, when a nearly camouflaged sound makes a brief visit. That sound channels a Beatles’ song, but we can’t identify which one. The closest we come is “Baby You’re a Rich Man”” where a monophonic keyboard (a clavioline) is set in its oboe setting.

“'Wide Eyed' is about getting lost on a night out in Manchester and was written out of the blue in a sound check."

The four members of Slowlights are Dan Clark, Bill Dukelow, Tim Hillier Brook, and Stephen Dukelow. The band has toured with Eliza and the Bear, which also includes a Dukelow (lead guitarist Martin Dukelow).

“While the Days Go By” by Somehow – A Song Review 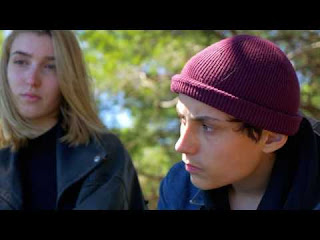 “While the Days Go By” is unadorned and primarily resides in the lower frequency range, particularly during its early reliance on a strong bass line. In blogosphere jargon, the term “Lo-Fi” might be applied. But Lo-Fi is shorthand for low fidelity and we aren’t ready to use the term to describe a track that includes enduring male/female harmonization and alluring sounds that are unconventional to most Indie playlists.

The track was released by Somehow, which is the performance moniker of Erwan Pépiot. The female voice is Aurélie Tremblay’s. The final portion of “While the Days Go By” is most attractive for its contrast in the approaches of the two vocalists. Earlier, Tremblay followed Pépiot’s matter-of-fact approach to the chorus. Then, in the last visit to the chorus (and the preceding verse), Tremblay’s intonations express greater emotion.

In June 2107, Somehow released a nine-track album titled “Hidden Memories.” The album credits note that “acoustic guitars, keyboards, melodica, violin, and cello” were employed. Aurélie Tremblay is the cellist, but we don’t detect the cello in “While the Days Go By.” Erwan Pépiot is a multi-instrumentalist based in Paris. He wrote, recorded and mixed the entire project on his own in his home studio.

The lyrics of “While the Days Go By” are included below. The stanzas are constructed around wishful/regretful conditions, “If only…” But the message can be positively interpreted, “Live for the day.”

“While the Days Go By” by Somehow 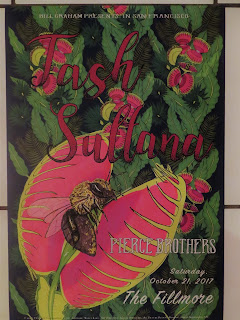 On October 21, Tash Sultana headlined at The Fillmore in San Francisco. The experience was electrifying. Tash is a “looper.” That is, she plays and records a guitar or other instrument as a first layer of a song, then replays the recording while adding additional layers. Her performance on a late night show is included in this post. 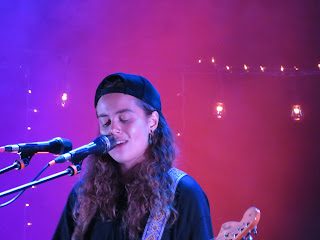 We’ve seen and appreciated the skills of other loopers, including Grimes, Jack Garratt, and Julien Baker. The difference with Tash Sultana is she comfortably travels through diverse genres, keeping her set fresher. Within her best-known track, “Jungle,” she showcases both a Caribbean rhythm and a Rock guitar. Another difference involves her vocal power and range. 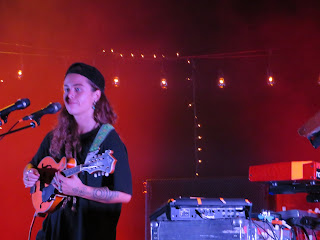 Sultana isn’t shy about sharing her viewpoints. She listed bias-specific reasons why attendees should “Get the fuck outta here!” Most were based on attitudes toward sexual preferences. She also talked about having to cut her European tour short because of symptoms of mental issues. Her honesty was enlightening and refreshing.

Two weeks ago, someone asked us why the 12-string guitar seems to have disappeared. Sultana found one for her encore! At the start of “Blackbird” (not the Beatles track), she showed her skills in using the traditional approach to playing the instrument. Then, she exhibited exceptional skill by restricting both hands to the guitar neck. 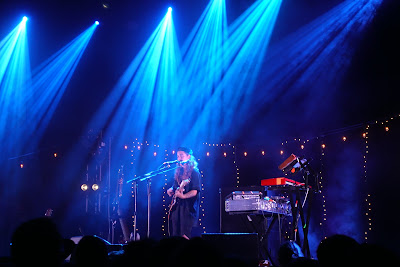 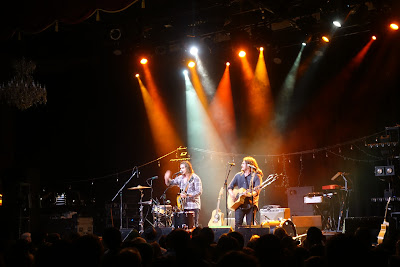 Opening the evening was a performance that is best described as a party. Like Tash Sultana, Pierce Brothers are from Melbourne. They have infectious energy, an ability to get the full attention and cooperation from concert-goers, an array of instruments (including harmonica and the didgeridoo), and an enviable chemistry. 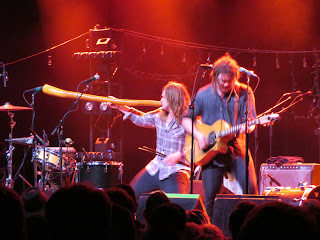