We became aware of the Los Angeles band Milo Greene thanks to obsessive behavior in collecting songs with titles that are merely years in the 20th century. For Milo Greene, the year-based title is “1957” (technically, the title may have been an address). However, we didn’t become aware of the performance skills of Milo Greene until we migrated to their set at the Outside Lands Festival in 2013. Listening to recorded music from the band did not provide preparation for the combination of guitar and harmonization talent that was readily apparent at Outside Lands.
So, the obvious decision was to watch for the next opportunity to see Milo Greene in a more intimate setting. When the tour announcement was that the band would open for Bombay Bicycle Club, we grabbed tickets.
Milo Greene has been working on new music. To quote their website, “After a full year of writing, demoing, recording, mixing, mastering, and nitpicking, our new album, “Control”, will be available January 27th, 2015.” The first single is “White Lies.” It fits more easily into the Pop genre than we would prefer, but we’re still looking forward to seeing it live at The Warfield on October 5.
The members of Milo Greene are Robbie Arnett, Graham Fink, Marlana Sheetz, Andrew Heringer and Curtis Marrero. 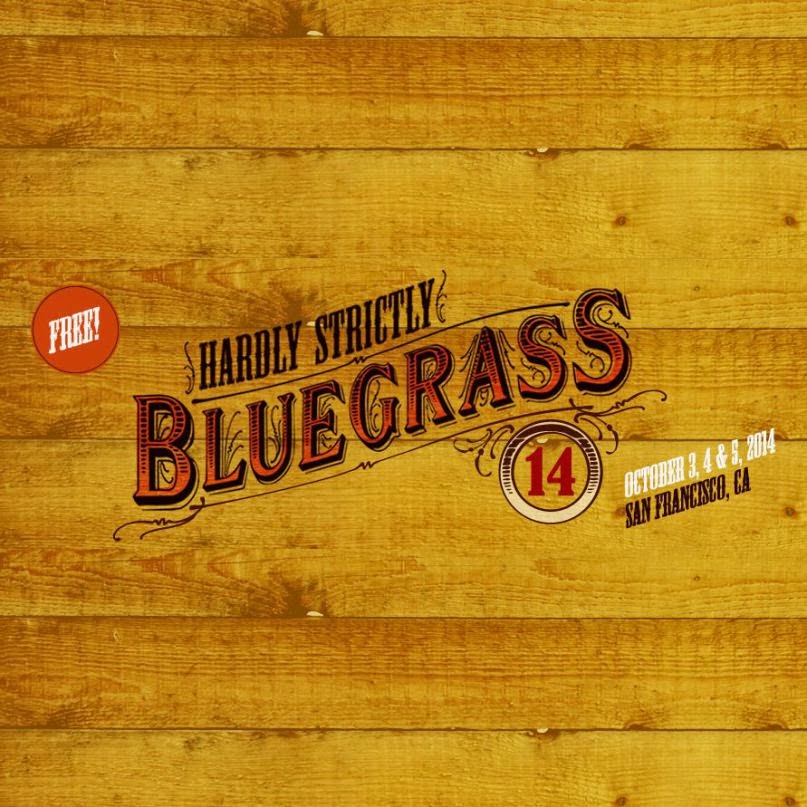 This weekend is the FREE festival in San Francisco. The Hardly Strictly Bluegrass Festival is held at Golden Gate Park. This post provides the schedule and some survival tips. If time allows, we add some recommendations in later posts. Admittedly, there are plenty of scheduled performers about whom we are relatively clueless. 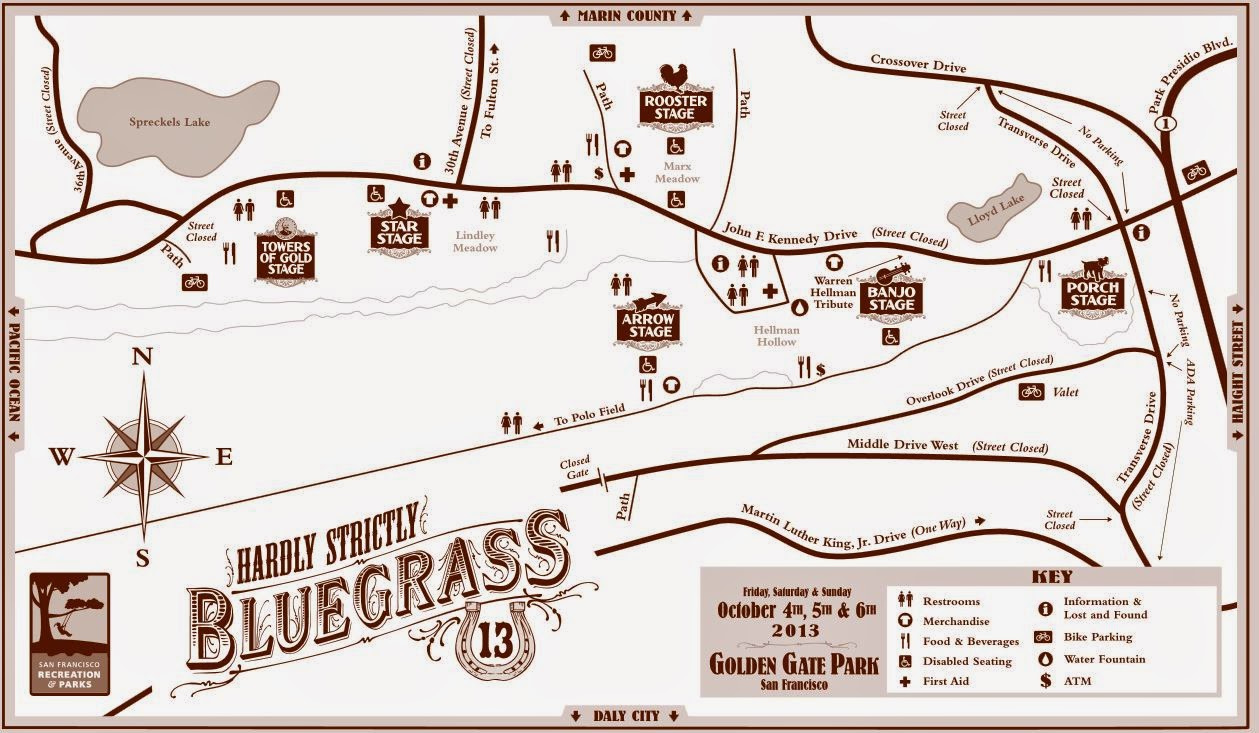 Hardly Strictly Bluegrass Tips:
1. There are two position strategies, which can be labeled “This green grass is mine approach" and “Grass is always greener approach.” The better strategy for you depends on a combination of your personality and the level of your desire to see a particular band(s).
A. If there is a must-see band in your opinion, then take the first approach - spread a blanket as close as you can to the stage on which the band will perform and then use the blanket as your homestead.
B. For people like us, who are always wondering what they’re missing, the second approach is better – sample a band for a short time before moving to the next stage, but know that you’re going to be further away with each passing hour.

2. Beer and wine vendors are not allowed to setup an establishment, but you can bring alcohol with you. And it is not difficult to find someone selling a beer for a cheaper-than-expected price.

3. You can bring food. Backpack searches don’t occur, since there isn’t an entrance area.

4. Remember, if you’re tempted to buy something that is illegal, the seller will soon disappear into the masses. Buyer Beware!

5. At the Outside Lands Festival, there are 65,000 people per day, and it is a mess. That is basically the same venue as the Hardly Strictly Bluegrass Festival, which draws nearly three times as many people per day. Be prepared for chaos.

6. There are two stages that are back-to-back. Because the Star Stage and the Towers of Gold Stage are so close, the performances are timed so that one is being used while the other is being prepared. If you are planted in front of one stage (This green grass is mine approach), you won’t see the bands on the other stage, but you’ll hear them. The result is almost continuous music.

7. In past years, the only stage that didn’t become massively overly congested was the Porch Stage. It is small and isn’t assigned the big-named bands, but it is a great opportunity, especially as the day goes on.

8. As you are traveling from one stage to another, look for short lines at the rest room areas, even if you don’t currently feel a need.

9. If you start feeling agitated by the congestion, leave. It is only going to get worse. Leave with a positive attitude.

The previous blog post referred to female vocals in the falsetto range. This post provides balance, because Laura Doggett’s voice is distinctive in its ability to live comfortably in the lower register.
Laura Doggett is based in Bath, U.K.

Facebook: https://www.facebook.com/lauradoggettmusic
Posted by D & d at 3:34 PM No comments:

“Walking on Wires” by Cut Ribbons – A Song Review

Indie Obsessive doesn’t have a preference of male vocals over female. Well, maybe a slight preference, but it is close. On the other hand, if the voices go into the falsetto range, the clear preference is male. In fact, the difference is so significant that we gravitate toward bands that regularly use male falsetto (for example, our early attraction to Bastille) and resist any gravitational pull by female falsetto. The female voice, by nature, is high enough.
Hey, there are exceptions. We enjoy the use of female falsetto by the band Cut Ribbons. And Indie Obsessive particularly recommends their song “Walking on Wires.” Cut Ribbons is based in Wales (Llanelli). The members are Aled Rees (vocals and guitar), Anna Griffiths (vocals), Shane Lee (bass), Christian James (guitar), and Caio Griffiths (drums).

“Walking on Wires” by Cut Ribbons

“Something Had to Give” by COMPNY – A Song Review

We believe COMPNY is a UK band from Brighton. But there is some uncertainty. We think the band includes members from Cave Painting, but we’re even less sure of that being accurate. What we can say with confidence is that Indie Obsessive enjoys the echoed, yet pure vocalization of the band vocals in “Something Had to Give.” The slow-play piano at the start is interesting and there are portions with solid guitar work. But the band vocals make the song blogworthy.
COMPNY is another band that is launching by playing while behind the curtain. If they continue to produce songs having the strength of “Something Had to Give,” they will be forced to raise that curtain.


“Something Had to Give” by COMPNY
Facebook: https://www.facebook.com/compnymusic
Posted by D & d at 4:10 PM No comments:

Die Antwoord at the Fox Theatre- A Concert Review

Die Antwoord put on an energy-filled show at the Fox Theatre in Oakland on Thursday evening. We have seen them before at an array of venues, one being an outdoor show at Austin City Limits Music Festival in 2012; the show on Thursday compared favorably. The more intimate setting made for an amazing and lively show. Maybe we couldn't hear as well the next day znd we went to work with blind splotches in our eyes, but we would see them again, repeatedly!

Die Antwoord is a South African rave-rap group consisting of female vocalist, Yolandi Visser, male vocalist, Ninja, and DJ Hi Tek.   They are known for their “out-there” appearance designed for shock value in what they refer to as “Zef” culture.

The group released its newest album in June of this year, entitled "Donker Mag;" however they only performed four songs from that album, with “Pitbull Terrier” being one of them.  It is their most popular song from the new album and is featured below. They played most of the songs from the first album “$O$,” and those were the crowd pleasers.  Their encore was “Enter the Ninja”.


If you ever have the opportunity to see Die Antwoord, we would advise to take advantage of that! It was also Ninja’s birthday yesterday, so Happy Birthday Ninja!!