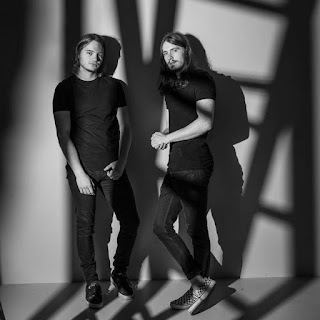 It’s a bird named for the noise it makes with the continuous high-speed beating of its wings, although the sound is more of a ‘whirr” than a “hum.” So, the title “Hummingbird” does not telegraph either the reliance on or the sophistication of the percussion in the song from Canary Gold.

“Hummingbird” begins with piano and vocals before the percussion pushes the door open with a layered approach. The source of the lower frequencies is easily identifiable as a large diameter drum. But there is a higher frequency component that is more difficult to identify – perhaps drumsticks hitting a suspended tambourine. Doesn’t matter; the frequency contrast is effective.

But “Hummingbird” is more than rhythm, it is a dynamic single that is vocally strong and instrumentally varied. Canary Gold also delivers guitar, which is particularly attractive in the final 30 seconds. In an email from the good people at A Badge of Friendship, the key sentence is “Combining simple piano with an earthy, rich lead vocal, Canary Gold produce an eclectic offbeat sound complimented by layered chanting, hand claps and tribal-like beats, creating a spellbinding, complex piece of music.”

A Badge of Friendship: http://www.abadgeoffriendship.com/canary-go

“Soul on Fire” by Raised on TV - A Song Feature 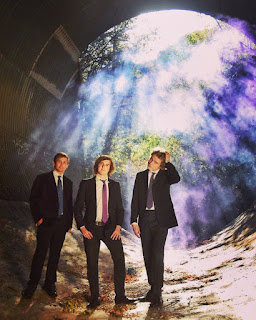 Another processing-light, instrument-authentic Rock grenade has been lobbed over the Indie wall by LA’s trio Raised on TV. A combination of guitar and drums leads into the explosion of energy that characterizes the single “Soul on Fire.”

The website of Raised on TV explains:
The latest single ‘Soul on Fire’ narrates rediscovering one’s self in the midst of the digital age. “It's about the fantasy of throwing your cell phone literally out the window, which is one of the lines in the song, and not caring whatsoever, which has become so hard to imagine.” The idea of disconnecting from the internet and all it entails, only to reconnect with your truest self. The idea of letting go of that dependency we now have as human beings to cell phones and the internet. Sonically ‘Soul on Fire’ bursts with adrenaline while maintaining a sense of self-reflection. Built upon multiple layers, the track narrates a traditional and infectious rock feel. The dreamesque verses lead you down a rabbit hole of self-introspection, giving you an insight into what to expect from Season 2.

The members of Raised on TV are brothers Keaton Rogers (guitar, vocals) and Kacey Greenwood (drums), along with Kacey’s best friend from high school, Ryan Weiss (bass). All three members grew up in the San Fernando Valley. They formed the band that became Raised on TV in 2015.

“Soul on Fire” by Raised on TV 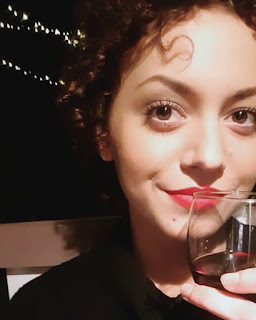 Today’s songs belong to Sahara Beck from Brisbane, Australia. The first is “I Haven't Done A Thing Today.”
To access the free download, go to the Triple J site and click the download arrow (https://www.triplejunearthed.com/jukebox/play/track/8064331).

My mother asked me if I'm gay
Hoping I would say I'm straight
'You know to me, it's all the same
Everyone is beautiful'

“No Work” by The Black Fever – A Song Feature 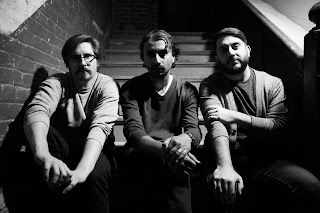 “No Work” immediately embraces a listener’s attention by means of a guitar progression that is soon joined by the heartbeat of a kick drum. It’s a strong start that raises expectations. The remainder of the song lives up to the heightened expectations. The instrumentation is varied, yet consistently strong and interesting. As an example, the percussion makes a higher frequency shift at the 3:05 mark of the single from The Black Fever.

The Toronto-based band explains, “Given the plight that many people are facing in the modern economy, the title ‘No Work’ just came to us, and the lyrics flowed from there.  It seemed appropriate to talk about, given how tough it is – particularly for younger people or newer graduates from university or college – to find and keep a good job.”

“No Work” is a single on the recently released EP “Unarticulated Wants.” The members of The Black Fever are Shoe (vocals, guitar), Pat Bramm (bass, back-up vocals), and Dan Purpura (drums). Originally, it was a solo project of “Shoe,” but he knew Bramm from the University of Toronto. Purpura joined after being with another band.

“No Work” by The Black Fever 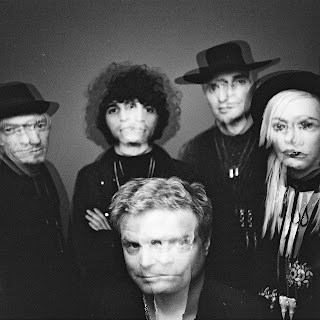 Earlier this month, Curse of Lono released a live album that includes “Pick Up The Pieces,” giving new life to the song and opening the door to posting our top three songs from the band. We assume they were named for the Hunter S. Thompson book in which he described his 1980 experiences in Hawaii.

“Pick Up The Pieces” by Curse of Lono

“Cinematic Southern Gothic Alt Rock” is the description Curse of Lono attaches to its music. It’s a description that invites rearrangement. While listening to “Five Miles,” the Southern component is prevalent, since the guitars are acoustic and Southern-style electric. “Cinematic” is appropriate. The song includes “Rock” elements and it is “Alternative” music. We wouldn’t have called it “Gothic” without the suggestion from the band, but we can buy into the designation. Our description of “Five Miles” would relocate the descriptors, with "Southern" at the start and a de-emphasis of “Gothic.”

“Five Miles” by Curse of Lono

“Send For The Whisky” by Curse of Lono

“Why Am I Alone” by Widespell – A Song Feature 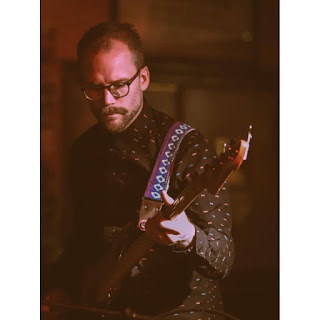 “Why Am I Alone” is melodically relaxing, but lyrically troubling. The vocals possess a deep resonance that would be reassuring, if the description weren’t dark and the question weren’t angst-filled.

Widespell is the project of Nick Widener, along with the brothers who form Airpark – Ben Ford and Michael Ford, Jr. The project is based in Nashville. Widener explains:
“Originally, this was nothing more than a creative outlet for myself. Shortly after jamming on several ideas, it started pulling me into an avenue I’ve never tapped into. I then took these ideas into Eugenia Hall in Nashville where I allowed them to breathe and take shape for a single week. ‘Anyone’ was the first of the tunes to reveal itself and it became the reference point for the vibe of the EP.”

“Why Am I Alone” by Widespell

The influence of War on Drugs is more apparent in the track from Spectator, but it lives comfortably within the sound of Naked Strangers as well. 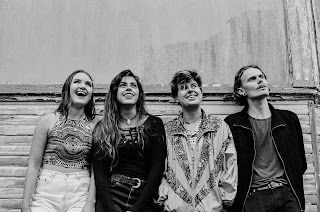 “Honey Roast” begins with a double-bass, holding the War on Drugs-esque guitar at bay long enough to notify the Indie Universe that Naked Strangers owns its sound. The band is based in Sydney, Australia. They are Mahn Lion (drums), Suami Werkmann-Sanchez (guitar, vocals), Brett Morgan (guitar, vocals), and Evangeline Read (double-bass). Quoting their bio:
Expect fervent melodies, alluring rhythms, and anthemic choruses from this powerful 4-piece. Backed up by dark and enigmatic double-bass, Naked Strangers leave you somewhere between a breathless silence and accidentally singing along. Their lyrics occupy a sincere and vulnerable openness that reflects what it's like to… well, just be alive and breathing. As genuine as they are brutally honest, Naked Strangers are able to embody that space between relatable, charming, funny and warm, despite the heavy blues and folk rhythms that built this wonderful beast. 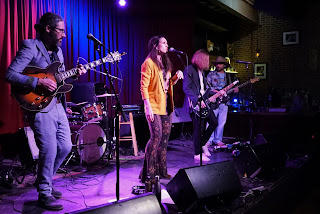 Spectator is the wife-and-husband duo, Megan Rooney and Jeffrey Albert, who first met in 2006 in Saint Louis. Their genre is Dream Pop. It’s the single “Weight” that showcases the War on Drugs skills. Spectator explains, “Layers of upbeat guitar symbolize the free, unbolted feeling of living in the moment as the moment itself begins to fade away.”

“Weight” is on Spectator’s album “Charlie, Baby,” which reflects on “the lonely nights, the empty hearts seeking fulfillment, and the comforting feeling of holding on to memories even as they fade out of focus.” 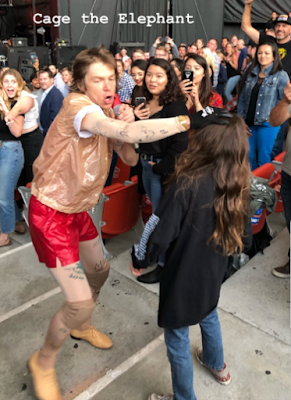 Beck, Cage the Elephant, and Spoon visited Mountain View, California. Here are our favorite pictures from the show. 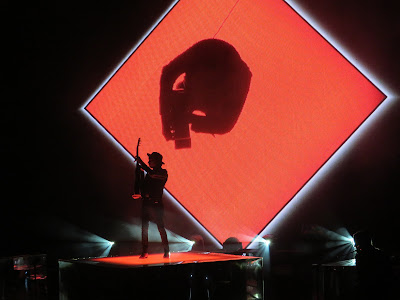 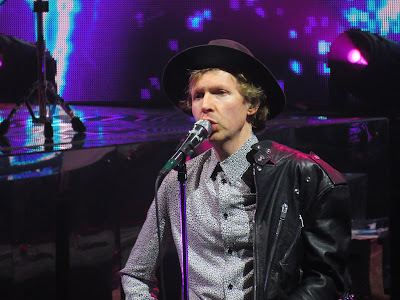 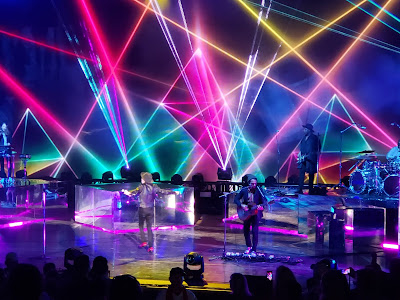 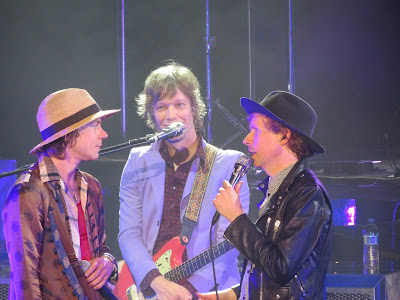 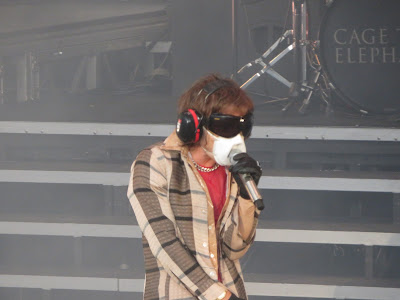 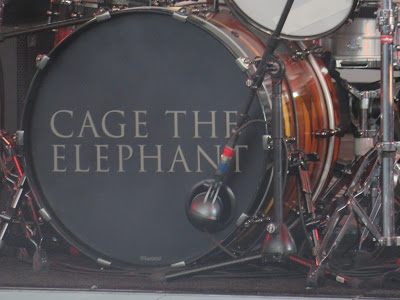 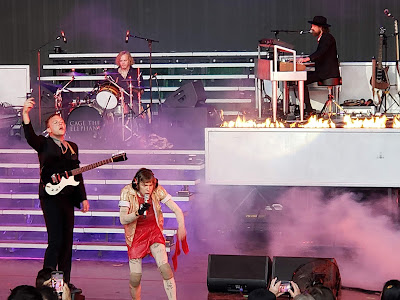 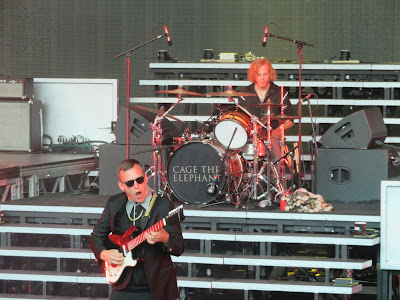 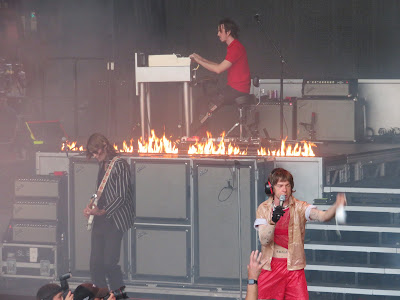 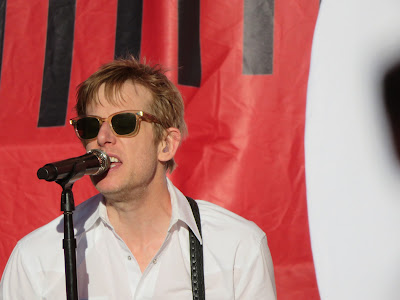 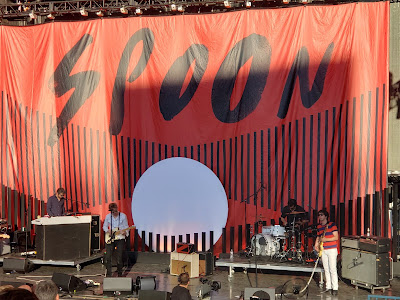 “California Suite” by The Honeymoon Suite 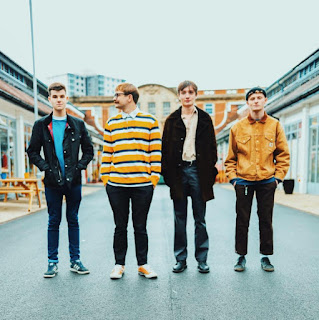 The song is not about the state in southwestern U.S. Instead, it’s about the southwestern area of Derby, UK. The Honeymoon Suite is a quartet from Derby, which helps explain the band shout of “Everyone seems to think like me!” during their single “California Suite.”

“California Suite” by The Honeymoon Suite 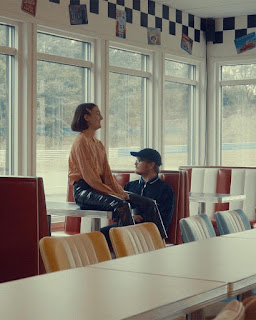 Wy is comprised of longtime lovers Ebba and Michel, from Malmö, Sweden. “Softie” is the title track of their 2019 album. The album is a statement on the turbulence of human existence, written from Ebba's experience of being bipolar. With clarity in emotion and unapologetic use of lyrics, it's an important record in more ways than one way. “Softie” was released via Hybris/Beatnik.

Lyrics of “Softie” by Wy
I just wanna tell you how I feel
But I don’t talk about my misery
To you, to no one
Don’t wanna drag you in
I just try to tell you how I deal
With all the shit I think
All the dark I see
And how I push through anyway
I do it all for you
I break my back for you
It's all I wanna do

“Death By Love” by Yonaka – A Song Feature 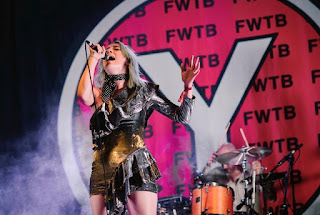 Yonaka has made its impact upon Europe, but the U.S. is inexplicably lagging behind.

“Death By Love” by Yonaka

It's you and I
It's you and I
I set fire to the guy with a drink in his hand and his jeans all turned up
I took a ride from a guy and his girlfriend cried when my gun went off
And I'd turn suicidal if it meant I'd earn my baby's trust
And when my body drops declare this woman: death by love

I could never tell him “No!”
'Cause he does not like being told

It's you and I
It's you and I
I set fire to the guy with a drink in his hand and his jeans all turned up
I took a ride from a guy and his girlfriend cried when my gun went off
And I'd turn suicidal if it meant I'd earn my baby's trust
And when my body drops declare this woman: death by love

'Cause we fight too much and we cry too hard
And we drown our sins and we make new scars
You're a dangerous man, it's a dangerous game
But I wouldn't have it any other way

I set fire to the guy with a drink in his hand and his jeans all turned up
I took a ride from a guy and his girlfriend cried when my gun went off
And I'd turn suicidal if it meant I'd earn my baby's trust
And when my body drops declare this woman: death by love
[Repeat]