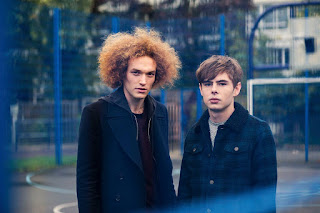 Seafret takes a different approach than most bands we review. The UK duo keeps a low profile on Soundcloud. This decision limits their exposure on Hype Machine, which mines the posts of member blogs for songs of selected formats. Seafret has thoughtful, sensitive videos uploaded to Youtube. But blog posts that only include Youtube videos don’t extend to Hype Machine. Effectively, that’s the “rule.”
Seafret plays by its own rules. More power to them! The UK duo makes its mark by regularly releasing quality music. Jack Sedman (vocals) and Harry Draper (guitar) are from Bridington, a coastal town of the North Sea. The band name has both a musical significance (a guitar fret board) and a personal significance (a “seafret” is the term for the rolling mists that enter from the North Sea during summer).

We find the video for “Oceans” to be the most powerful in the video library of Seafret. Visually, the message is about bullying. Lyrically, the song is about a relationship – “It feels like there’s oceans between me and you once again; We hide our emotions under the surface and try to pretend.”

In describing their song “Be There,” Seafret states, "The track comes from a very personal place, about being there for the person that needs you most in life, no matter what - it's about making more than a promise."


When we focus on the music by stripping away visual and lyrical messages, our favorite song by Seafret is certainly “Give Me Something.”


The video for “Atlantis” is a sometimes uplifting and other times tragic.