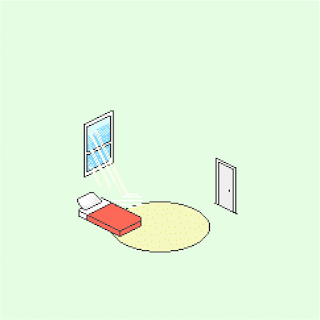 “White Light Doorway” is the modern day equivalent of “Mercedes Benz” by Janis Joplin. OK, now that our credibility is destroyed, let us explain. Melodically, there aren’t any similarities – we concede that point. Vocally, the elemental skills of the vocalists couldn’t be much further apart – conceded.
But the attractiveness of “White Light Doorway” by Florist lies in its simplicity and seemingly childlike innocence. Same with “Mercedes Benz.” And “White Light Doorway” ends oddly, with an almost fingernails-on-the-blackboard guitar note. “Mercedes Benz” ends with Joplin announcing “That’s it” and a giggle. Neither song lasts more than two minutes. Lyrically, both songs have a non-innocence, with Joplin asking that the Lord prove his love by buying the next round, while “White Light Doorway” asks:
“Please come quick I stuck my head in the banister again
But I just wanted to know what it would feel like
With one part of my body alive.”

“White Light Doorway” will be part of the debut album of Florist. The album is due on January 29, 2015, via Double Double Whammy. The title will be “The Birds Outside Sang.” According to the press material for the band:
"Florist is, and began as the friendship project of Emily Sprague, Rick Spataro, and Jonnie Baker in Upstate, NY. The three started making weird sounds on synths and guitars together as a way to cope and relate, and grew close. Felix Walworth joined as a drummer and collaborator when Emily moved to New York City and continued writing songs with the moniker."