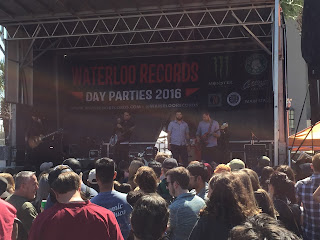 100 Free Songs?!! Yes, each year NPR selects songs from 100 artists headed to Austin for South by Southwest (SXSW). The collection is intended to provide a preview. This year’s collection is a strong one. A complete list is included at the bottom of this post. To the credit of NPR many genres are represented.

Some of the songs were featured in previous posts of Indie Obsessive. For example, “Edge of Town” by Middle Kids and “Destitute” by Christopher Paul Stelling were featured in posts within the last month. But here are some additional songs we recommend.


"Goji Berry Sunset" by Jealous of the Birds


"Califone" by No Joy