Glockenspiel in Riga and by Rigbi 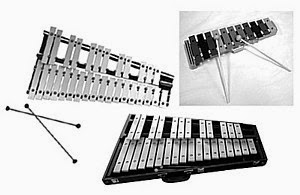 Charles Schulz was the cartoonist who created Snoopy and Charlie Brown. He found  the pronunciation of "Zamboni" humorous. With only a small amount of context, Schultz would fit "Zamboni" into a Peanuts comic strip as a punchline, leaving some readers wondering if they missed the joke. Well, Indie Obsessive finds the pronunciation of “glockenspiel” humorous, but we have no illusions of ever being as loved as Schulz.
To set the record straight (because we got it wrong earlier this year) the glockenspiel has metal keys that generate notes when struck, while the notes from the xylophone are provided by wood. In 2014, the best uses of the glockenspiel are by a band named Rigbi and a band from Riga, Latvia.

Rigbi is a band from Sparta, New Jersey. The members are Brian Cornish (drums), Jon Irizarry (guitar, vocals), Pat Maloney (keyboard, percussion), and Randy Sabo (bass). Even the Soundcloud waveform of their song “Leaving Home” shows the steadily increasing energy of the track.


“Akmentiņi” is the poetry of Imants Ziedonis set to music. Ziedonis, who passed away in 2013 at the age of 79, was a Latvian poet who carefully walked the balance between dissidence and acceptance during the Soviet occupation of Latvia.
The four members of Carnival Youth are Roberts Vanags, Aleksis Luriņš, and twin  brothers Edgars and Emīls Kaupers.
“Akmentiņi” by Carnival Youth