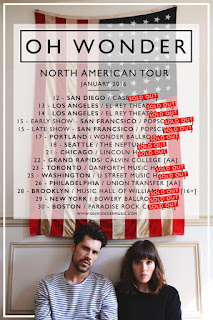 Anthony West and Josephine Vander Gucht entered the stage at the historic Neptune in Seattle on the night of January 18th as the crowd erupted in cheers. A big “OW,” standing for Oh Wonder, radiated in neon behind their bodies as their magical duet vocals from the song “Livewire” radiated toward the audience.

This show at the Neptune was just one of the many sold out shows on the Oh Wonder tour.
“We sold out our last European tour, we sold out Australia, and Russia had more people than anywhere,” West said excitedly. “But we originally didn’t expect to be selling out shows in the UK let alone in America, so it’s really nuts.”

And nuts it was, seeing Oh Wonder blow up the Neptune with a kind of vibrance unlike any other. But before that, I had a chance to sit down with the masterminds of Oh Wonder, West and Vander Gucht, to chat about the success the band has felt in the last year and a half.
After exploring themselves as individual musicians for a number of years, the duo met each other about four or five years ago in a music studio in London. West and Vander Gucht bonded over having the same musical tastes – Death Cab For Cutie, Feist, Joni Mitchell, and James Taylor, just to name a few of their favorite artists.

West and Vander Gucht also cited the UK, and London specifically, as being a large inspiration for their music. West grew up on a small island in the UK and Vander Gucht grew up in London, which the duo said sparked creativity in their music.
“There’s all kinds of different people [in London] from all over the world,” Vander Gucht was glowing as she gushed about her home city.
But all gushing aside, Vander Gucht detailed the deeper ways in which London motivated her and West to write music for their record.
“London is full of successes and failures and wealth and poverty and all this kind of extremes,” Vander Gucht described. “So it harnesses the idea of meeting in the middle and having a kind of universal understanding that we’re all people amidst this injustice and imbalance; we’re all people and we all need to be there for each other in this community.”

And through the influence of London, the duo started producing music together in September of 2014, and released one song per month for an entire year.
“We enjoyed the process of writing and releasing our first song so much that we just wanted to have that opportunity to do that twelve more times,” Josephine explained. “There was no intention of marketing.”
But West and Vander Gucht do recognize, in hindsight, it was a great way to gain (their 110,000!) followers through their Soundcloud account. It allowed listeners to feel connected to their full album, rather than just a few singles. This decision clearly contributed to the hype in the house of the Neptune. Nearly every audience member knew every word to every song, as evidenced by the below video (which was recorded and uploaded by another attendee at the Neptune: thank you "theartistblurgh").

The duo appreciates their listeners so much, that they’ve chosen to ignore their label’s request to delete their Soundcloud offerings for legality purposes.
“People listen to us on Soundcloud and we don’t get paid,” Vander Gucht explained, “But the reason we’re here is because of Soundcloud, so it seems so weird to then shut it off. Music should be accessible.”

One lyric from the song “Dazzle” performed during their show confirmed what Vander Gucht explained about Soundcloud: the duo is not in this business for money. The show was entirely accessible to many different types of people who walked through the Neptune’s doors. People of many ages and demographics were all grooving to the music and taking videos to capture the moment as best as they could.
Any worry I’d harbored prior to the show about cheesy male/female duet vocals melted away the more I saw West and Vander Gucht perform live. Unlike similar electronic sounding singer/songwriters, the duo plays traditional instruments – piano and guitar – and they have a live band.

The authenticity of their sound allowed me to hold high levels of respect for them. The combined talents on that stage proved to be thoroughly experienced and genuine, especially Vander Gucht’s flawless piano skills.
In addition to creating their own music and lyrics together, the duo designs their own posters and manages their own social media. Vander Gucht said she would never allow anyone to put words in her mouth via the internet as a mode of staying close to the groups fanbase, and this bone fide care for the fans shined through the entire night at the Neptune.

This is a second video from last night's performance (another thank you to "theartistblurgh").
Posted by D & d at 9:33 AM