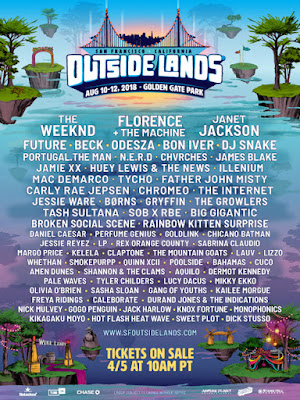 The lineup for Outside Lands was announced yesterday and 3-day passes hit the market tomorrow. Music followers know the headliners well. The same is true for most of the lines of middle-font artists. But what about the small-font performers and some of the lesser known middle-font bands?
We have some exploration to do prior to the August festival, but here are some recommendations thus far.

One reason for excitement is Gang of Youths. The Australian band has a presence made for a festival setting.


“What Can I Do If The Fire Goes Out?” by Gang of Youths

Dermot Kennedy impressed at SXSW 2018. He is from Ireland, and while singer/songwriters are not ideal festival performers, Kennedy may be an exception.
“Moments Passed” by Dermot Kennedy


A few years ago, Rihanna selected Mikky Ekko for the male voice in her hit “Stay.” Whether you consider that a positive or negative, it is impressive that he was selected by a performer with the clout to handpick from an almost infinite number of choices.
“Not the One” by Mikky Ekko


The Mountain Goats should be at a time and stage that allows a fan to be reasonable close.

“Rain in Soho” by The Mountain Goats


In her track, "Shutter Island," Jessie Reyez transitions among vocalizations, including (1) an endearing child-like style, (2) an angry style in which the admission of craziness comes with a self-assured statement that her straight jacket is custom-made, and (3) a more traditional style in which the admission is one of being a “bad bitch.” And that ignores the interjections from the backing vocals. Reyez is from Toronto, Canada.
“Shutter Island” by Jessie Reyez

Tash Sultana is a “looper” from Australia. It’s true for every performer, but more so with Tash – being close enhances the appreciation.


We are fans of the band name and music of Rainbow Kitten Surprise.