“Ghost” as a Band Name or Song Title 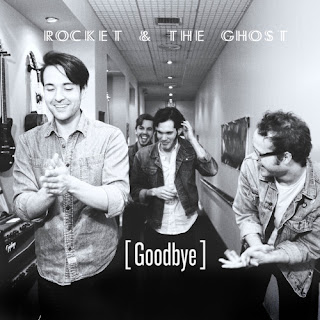 Almost literally (there’s a word that is in vogue), it is a daily occurrence to run into a new song title or band name that includes the term “ghost.” While “beach” is also popular as part of a band name, there is an explosion of “ghosts.” Perhaps to bridge the transition, there is the New York band “Ghost Beach.” Oh, and “wild” also ranks toward the top of words used in band monikers, but so far there’s no “Wild Beach Ghost” (at least not to our knowledge).
The most recent ghost-related discovery which we consider a “keeper” is the band Rocket & the Ghost. In particular, we appreciate the song “Goodbye,” which was released in July. Thirty seven seconds into “Goodbye” is an effective cooperation among the percussion (slapping drum sticks and rhythmic clapping?), the bass, and a crisp guitar sound.
The members of Rocket & the Ghost are Kiyoshi Matsuyama (vocals and guitar), Brian Kesley (bass), Stuart Bidwell (drums), and Sean Gavigan (guitars). But Internet info states (and therefore MUST be true) there is a fifth member, who is now Lily Claire (vocals and keyboards), although she recently was Lily Nussbaum.
"Goodbye" by Rocket & the Ghost

Other recent ghost-related songs we find interesting are:
"Ghost" by Folly & the Hunter - Currently a free download

"Emily Green" by This Old Ghost - Currently a free download

"So High" by Ghost Loft

"Fade Out" by Farewell Dear Ghost