In Their Thousands – A Band Review 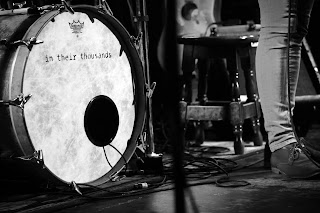 For some songs, there is an immediate appreciation. There is a slight downside when this happens, because of the concern that the appreciation will disappear almost as quickly. Maybe as few as 25 plays later, a realization hits – you have heard the song often enough, move on ‘cause there’s nothing to see here (or rather “nothing to hear here”).
For other songs, it is the opposite. The first 25 plays may bring a lukewarm reception, while the 26th brings an appreciation for aspects of the song that were previously taken for granted. Yesterday, the “realization play” occurred for the song “0400” by In Their Thousands, a band based in Letterkenny, Ireland. We played the song a few more times and then again this morning to see if the connection remained. It did.

So, we decided to look into other songs by In Their Thousands. Embarrassingly, we discovered that we not only knew another one of their songs, the band had already been introduced to Indie Obsessive. If there is a defense, it lies in the lack of similarity between the two songs. Even the genres are different. The song “0400” is Indie Rock, while the song in the earlier post was Indie Folk. The two songs have different lead singers and feature different instruments (electric versus acoustic). It’s not a good excuse for not recognizing that the same band is responsible for both songs, but it is all we have.
The members of In Their Thousands are Ruairi Friel, Aidan McClafferty, Declan McClafferty, and Liam Kelly. All four members contribute to the songwriting, which at least partially explains the degree of variety among the songs of the band. It works well for these guys.
Since the song repeatedly refers to four in the morning, the title “0400” should probably be verbalized as “Zero Four Hundred,” the military reference to that time of the morning. The song rotates between the acoustic and electric guitar, until an acoustic pluck at the 2:15 mark triggers a one-minute dedication to driving electric guitars (and some falsetto vocals).
"0400" by In Their Thousands


The “Woodcutter” by In Their Thousands was introduced to Indie Obsessive as part of the blog entry of May 18 (if you are interested,CLICK HERE). The song is a poetic and romantic description of a woodcutter who deals with the death of a loved one by carving her image out of wood.