“Who Returned” and “Real Life” by Arthur Beatrice – Song Introductions

Arthur Beatrice is headed toward an album release. On May 20, “Keeping the Peace” will drop. “Real Life” and “Who Returned” will be among the tracks.
Every music lover has a short list of artists who trigger the question, “Why aren’t they receiving far more attention than they are?” Arthur Beatrice is on our list. The letter that is embedded below touches upon the feelings of the band regarding the subject (if you're interested in reading the letter,click the image to enlarge it). 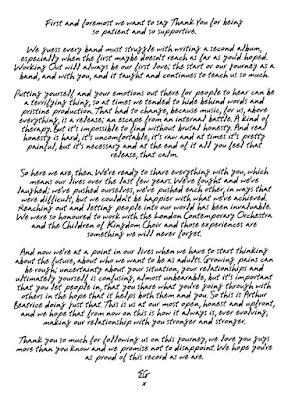 "Click" on the letter to enlarge.
Based upon the songs “Who Returned” and Real Life,” the band’s sound has undergone a shift, but fortunately not a major one. It will be interesting to see (hear) whether the shift will be across the entire album. There is less participation in the vocals by the male members. The increased focus is on the alluring vocal skills of Ella Girardot. There is also less emphasis on the drumming of Elliot Barnes and more on electronic contributions. Then, there’s the beauty of the contributions from members of The London Contemporary Orchestra, but that’s likely only for the one song on the album – “Who Returned.”


There is always a hesitancy before posting a song by a band with a history of pulling their Soundcloud streams after a short time. The posts look barren when Soundcloud can only post the message, “Oops, we couldn’t find that track.” But when the purposes of a blog are to write about and share the songs you enjoy, the hesitancy lasts for only a short time.