“Never Have Time” by The Royal Foundry – A Song Review 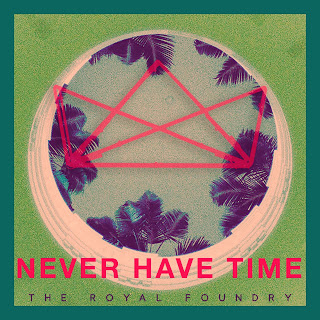 It is rare that a song hits with sufficient force to immediately self-propel to the upper tier of a listener’s go-to playlist. “Never Have Time” accomplished the improbable. Better yet, because the track has emotional balance, tempo variations, and some whimsy, it is likely to have staying power.
The emotional balance is a result of clothing a discussion of deflating subject matter in an uplifting melody:
She was going her own way
Clearing a path too treacherous to pave
And here I was just screaming out her name
Calling her back from digging her own grave
She said:
Never have time for me
Never have time for you


For most of “Never Have Time,” the tempo is electric, but the energy levels transition on a regular basis. The song begins with a somber feel. The mood changes temporarily at the 0:23 mark. Still, it’s not until the second minute of the song that a listener is aware of the acceleration and drive that “Never Have Time” has to offer.
Instruments and vocal interjections that are more common in the “World” genre provide the whimsy.

The bio in the SubmitHub:
“The Royal Foundry came together through the marriage of Bethany Schumacher and Jared Salte. What started as a folk duo quickly evolved into a full throttle Alt-Pop quartet [Jared and Bethany Salte, Robbie Szabo and Jeremy Dehek]. Both Jared and Bethany were born and raised amongst the beautiful Prairie-Skies of Alberta, Canada. Bethany was the preacher’s daughter who developed a love for the visual arts. Jared, on the other hand, grew up surrounded by music as the son of a Touring-Rock-Musician. They quickly formed through a musical and literal marriage. Jared and Bethany Salte had no intentions of starting the Electro-Folk-Pop trio that is now The Royal Foundry; But after the release of “All We Have” received international exposure through the John Lennon Songwriting Competition and ABC’s Rookie Blue they knew they had discovered something special.”

“Never Have Time” by The Royal Foundry

They say a house is not a home
But our house never felt like anything, because I was alone
But you and I are meant to be
You are my dream, I won't give up on you and me