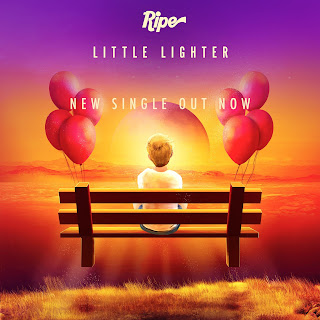 Ripe is bringing the good wine and the funk in “Little Lighter.” The musicianship is front and center in the newest single from the Berklee College of Music funk prodigies, from the opening bass line through the dual syncopated guitars in the bridge (complete with the signature Stratocaster spank sound clearly inspired by producer Cory Wong, known for his lightning fast strumming alongside low-volume funk heroes Vulfpeck).

Ripe defies traditional categorization, throwing in complex jazz chords too academic to be lumped in with popular dance music, but “Little Lighter” sees them embracing the joy and mystery of a prospective partner on a dance floor. The chorus triumphantly declares, “I feel a little ligher / A little lighter than before,” and it’s hard not to when listening to Ripe’s airtight horn section punctuate the disco rhythms in what would surely be the indie-funk song of the summer if not for its January release date.

Ripe is based in Boston. The seven members are Robbie Wulfsohn (vocals), Tory Geismar (guitar), Jon Becker (guitar), Sampson Hellerman (drums), Josh Shpak (trumpet, EWI), Calvin Barthel (trombone), and Nadav Shapira (bass). The band’s tour schedule is included at the bottom of this post. They will visit The Independent in San Francisco on April 26. For ticket information, CLICK HERE.

Lyrics of “Little Lighter” by Ripe
You come out Friday, late
To hang out Riverside
You bring a couple of friends
I bring the good wine
And there, I'm stumbling over my tongue
I know this isn't a game

You're like a Holy Book
Written in a foreign tongue
I try to understand
Or just pull you under
And there, you send a smile and I'm lost
Yeah, I'm out spinning again

You come out to my home
Around three forty-five (?)
My expectations low
So I tell myself, then
You are choking up and I'm lost
And head on down to play games

See, I'm trying to follow the breadcrumbs
That are parts of the innocent pie (?)
Again, it's not entirely genuine
But I do not consider myself one of your lovers now
You're snooping around in the dark,
So, send a smile my way

Reckless subjects
You, I get a little excited
You'll be, uh holding
Me tightly, for some of my wild fire
Chasing these angels
You know I keep my eyes on the sky
I feel a little bit lighter than before