To Kill a King – Music's Equivalent to HBO’s “Dexter” 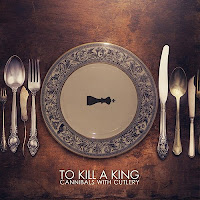 In the HBO television series “Dexter,” the principle character is an extremely likable guy with one flaw – he kills people.  Dexter refers to his “Dark Passenger” as being the source of his antisocial urges, but he channels the Dark Passenger toward good (removing other mass murderers from society).
We think we found the musical equivalent to Dexter.  The band seems to revolve around death, but if you look past that "flaw," it’s easy to enjoy their presence. What are the Dexter-like characteristics? The band is named To Kill a King, which is taken from Hamlet. As explained by the band’s songwriter, Ralph Pellymounter, ”I liked the idea of Claudius killing King Hamlet by pouring poison into his ear – and how that relates to music.” (Oh, that makes sense. Wait!!!)
We first became aware of To Kill a King prior to the start of our blogging. We entered a personal email address in order to qualify for a download of their song “Funeral.” The song is about wanting to have friends, so that your parents will be proud and will smile when the friends attend your funeral. OK, it’s not a statement you would feel comfortable hearing from your Daughter’s prom date. But each time we hear the song, we like it more. Nevertheless, without any good reason, we temporarily lost sight of “Funeral” within the music collection.
Using the email address we provided, To Kill a King sends us reminders of upcoming events. Each reminder includes a scene having the appearance of a suicide, but with “blue blood” (a reference to the death of a king?). This morning, we received an email that identified a Soundcloud opportunity to stream the album “Cannibals with Cutlery,” which will be released in the U.K. on February 24th.

That’s the Dark Passenger side. Now it is time to look at the music of To Kill a King. We are impressed!!! This is a group with a soon-to-be-released album that deserves attention. All of the bands we recommend have songs that are noteworthy, but few have so many within a single release. We have had discussions with a good friend (Bob G.) who makes a good argument that groups should be judged on their body of work, not just their best one or two songs. “Cannibals with Cutlery” is an album that should be appreciated by music lovers who enjoy isolated songs and those who enjoy listening to an album in its entirety. Below are our favorites today, but that might change before tomorrow.
"Funeral" by To Kill a King


"Letters to My Lover the Dylan Fan" by To Kill a King - we love the crescendo toward the end, with the quiet fade at the end. UPDATE - THE SONG IS NO LONGER AVAILABLE ON SOUNDCLOUD.


"Family" by To Kill a King - we like the light guitar and the horns (but not necessarily the short falsetto singing immediately before the horns enter at the 3:58 mark of the song – but it’s short).