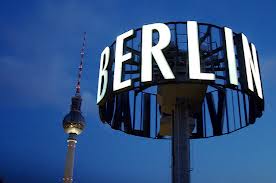 This may be the first in a series of blog entries which review at least two songs with the same title. The first entry of this type was on January 31, 2013, when we reviewed “Pompeii” by Bastille and “Pompeii” by Bear’s Den. It is easy to find songs with the same title, as evidenced by our collection of more than 80 different songs having the single-word title “Crazy.” But we are not going to feature songs unless we enjoy listening to them.
“Berlin” is the song title that is the focus of this blog entry. Four “Berlin” songs have grabbed our attention in 2013. One band is from Poland, two from Australia, and the fourth from Los Angeles, California (but one of the two Aussies has relocated to L.A.).

Lola Lynch offers “Berlin” from Poland. Interestingly, no member of the six-person band is named either Lola or Lynch, but all six have taken on monikers with the surname Lynch. Thus, the members are Marcelina Polniak (Alison Lynch - vocals), Martyn Bugajna-Skrzypczak (Kim Lynch - keyboards), Krystian Blejder (Jimi Lynch - guitar), Luke Krzyszkowiak (Elvin Lynch - drums), Marcin Skrzypczak (Jack Lynch - guitar), and guitar, Konrad Szadkowski (Peter Simon Lynch - bass).
In this “Berlin,” we particularly enjoy the beginning, with the repeating guitar pattern and the “gentle” piano. But that’s not to imply that we don't appreciate the two segments with the more forceful instrumentation.
“Berlin” by Lola Lynch

The second band is Bears with Guns – a band name that creates a great visual. This is a good example of why we don’t resist becoming obsessed with themes (although one of us did not fully understand or appreciate the bagpipes-in-rock obsession that the other went through). When “Wandering Soldier” was released a couple of months ago, we took notice, since we were in the gravitational pull of songs that included a trumpet. “Wandering Soldier” was strong enough to cause us to look to other songs by Bears with Guns. We discovered songs we liked even more. One song was, yes, “Berlin.” Without the trumpet obsessiveness, we would not be aware of Bears with Guns and the bands offerings. The trumpet is not a regular visitor to those offerings, but instruments of Bears with Guns include the cajon, djembe, mandolin and ukulele.
“Berlin” by Guns with Bears

These guys desire more attention in the United States, so we are including a second song - “Taken for a Fool” by Bears with Guns

The second Australian band is RY X. The song “Berlin” is heavy on the vocals and light on instruments. Actually, the artist is connected to three continents, since he is currently based in the United States (L.A.) and releases music through the Stockholm recording studio Dumont Dumont.
“Berlin” by RY X