“Goodbye to All That” by Cold Blood Club – A Song Review 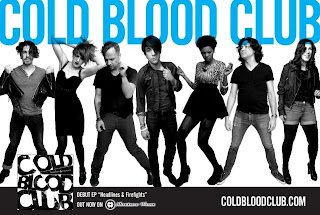 From time to time, a band will generate a few songs that draw some interest, and then release a song that causes people to stop and ask, “Where did that come from?” Well, the Brooklyn-based band Cold Blood Club have a few songs that are interesting, but where did “Goodbye to All That” come from?
Until July 2013, Cold Blood Club seemed to be focused on dance tunes that would keep the band relevant in the New York area. The single “White Boyz” did have success beyond the East Coast of the U.S., but had a limited shelf life. Well, to quote the most recent release, ”Say goodbye to all that now.”
Instrumentally, "Godbye to All That" is strong. Sure, the start has the feel of yet another over-produced synth-centric dance song. However, at the 1:11 mark, the violin enters and provides a separation from other songs in the genre. The violin enters and departs effectively. Moreover, the vocals provide shifts that keep things fresh – changing among the lead singer working with the instruments, the lead singer working with a choir of other members, and (at the 3:44 mark) the lead singer and a single drum being isolated. And after it seems safe to assume that all of the elements of the song have been presented, in steps a non-dance guitar at 4:46 to take us to the finish.
Still, while the instruments and voices are strong, “Goodbye to All That” has another contributor to its overall strength. This is an anthem. It is a song about reaching a point in life at which a person has perspective. What is that person telling goodbye? The song states:
1. We never helped a soul,
2. We never held our ground.
3. I was a passenger.
Yes, say goodbye to all that now, because it is time to stop being a passenger through life and instead take control.

"Goodbye to All That" by Cold Blood Club