San Fermin – A Concert Opportunity in SF and Elsewhere 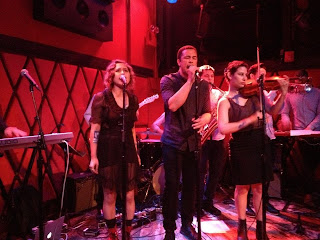 What, it’s been almost three weeks since we last sang the praises of the Brooklyn-based San Fermin??? Our obsessiveness regarding the band started with their song “Sonsick.” We liked this song on the first listen and, therefore, started paying attention to other offerings of San Fermin. “Daedalus (What We Have)” was our second exposure to the San Fermin sound. It didn’t have the same immediate impact, but over time supplanted “Sonsick” as our favorite by the band. Well, it’s time for the two songs to move over, because we found “Methuselah.” It doesn’t have all the swellings that we love about “Daedalus (What We Have),” but the combination of the violin and horns and the combination of the male and female voices push the song to the front of the line.
That said, let’s add some confusion. If we listen to “Methuselah” and “Daedalus (What We Have)” with equal obsessiveness, it will be “Methuselah” that will eventually fall to the wayside. There are certain songs that have a complexity of aspects and a subtleness of features that permit the song to survive obsessive play. Merely as examples, there are songs by Modest Mouse (“Dashboard” and “Missed the Boat”) and Arcade Fire (“Keep the Car Running”) that are as relevant to us today as they were when we first paid attention to them. These are songs that offer more than just hooks, which may “hook” our attention at the beginning, but become tiresome over time. And they are songs that cannot be arranged and produced in short order, since the layering, entrances, and exits of instruments and vocals require careful planning if they are to remain interesting even after thousands of listens (Why are bands proud, rather than embarrassed, when they assert they wrote and recorded a song in less than a day?). “Daedalus (What We Have)” has the potential to be one of these “years later go-to songs."

It would be interesting to hear whether San Fermin can pull off their sound in concert. Youtube recordings kindly posted by others after a live performance can be deceiving. At times, personal attendance is necessary to judge the quality of a live performance. Well, there is an opportunity to find out for ourselves. San Fermin is touring and one performance will be in San Francisco. The band will be at Café Du Nord on October 16th. The other tour dates are pasted at the bottom of this post.
Unfortunately, the San Francisco visit will be only a couple of days after our return from Texas to attend the Austin City Limits Festival. Returning late Monday after three days in the sun and then driving to San Francisco for an evening event on Wednesday is probably not going to be something our bodies will tolerate. Still, we haven’t abandoned the possibility. We have purchased tickets and hope/intend to use them.

[Unfortunately, "Methuselah" is not available on SoundCloud, yet.]
“Daedalus (What We Have)” by San Fermin

UPDATE - At least temporarily, San Fermin is allowing free downloads of "Sonsick" and “Daedalus (What We Have)” via Bandcamp. The cost is an email address, but the band would appreciate a tip.
Posted by D & d at 8:12 AM