“Sahara” by Bear’s Den – A Song Review and Concert Opportunity 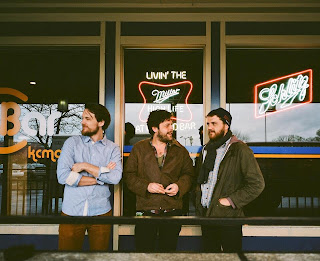 In January, we posted the song “Pompeii” by Bear’s Den. We still play the song on a regular basis. The band’s song “Agape” provided evidence that Bear’s Den would be more than a one-song contributor to our personal playlists. But we were not ready for their latest release – “Sahara,” which surfaced on Soudcloud only three days ago.
“Sahara” is a song that can easily be divided into three segments. The start of each segment is distinctively marked by one or more instruments. The first segment is introspective, initially with dream-like instrumentation and then with reminiscing about the love felt during and after a relationship that was not properly maintained. Statements include, “All my life, I wasn’t honest enough and I thought I would never get over you.”
The start of the second segment is marked by a guitar that is predominately featured after it enters at 2:26. In this segment, the lyrics are based on the opinion of another person, namely the person for whom the love was directed during the earlier relationship. Statements include, “You said I could never be happy with anyone.”
The start of the third segment is marked by a drum (the snare?) at 3:14. The first sentence is, “But I found love.” Now, the discussion is a contrast between the past (“I wasn’t honest enough…”) and the present (“But I found love.”). The band vocals are high quality and Bear’s Den suddenly becomes a guitar band. As much as we enjoy the first two segments, it’s the third that makes “Sahara” a standout.

On October 28, 2013, Bear’s Den will drop its EP, “Without/Within.” Digitally speaking, we are waiting in line. But we aren’t waiting to buy tickets to see them. Bear’s Den is making a stop in San Francisco on Monday October 7. They will be with Daughter. A blog entry directed to Daughter can be accessed by CLICKING HERE.  We jumped on the purchase of tickets.
Bear’s Den is based in London. The three members are Andrew Davie, Kev Jones, and Joey Haynes.
“Sahara” by Bear’s Den