“Hands Up” by Run River North – A Song Feature 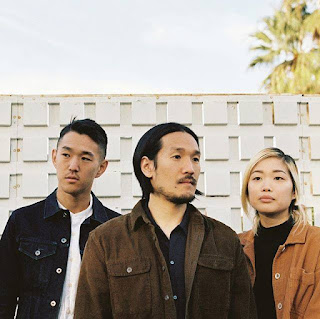 Waiting at the Austin airport following SXSW 2016, the discussion centered around the best performance experience during the festival. Surprisingly (at least for us), the final decision was between two Southern California bands – Run River North at The Speakeasy and The Record Company.at The Yard. After five days of music immersion, those two performances stood side-by-side above the rest.

Run River North has undergone changes since then. The band is now a trio. Fortunately, vocalization is still a strength, as evidenced by their latest single, “Hands Up.” Guitarist and lead vocalist Alex Hwang remains, as do the melodic purity and power of backing vocals from keyboardist Sally Kang and guitarist Daniel Chae. Having three appealing voices is a luxury that isn’t shared by many bands. Thus, during “Hands Up,” the exclamation “What!” can be treated with different degrees of emphasis and with alternative processing, while retaining melodic attractiveness throughout the deliveries.

“Hands Up” is a co-writing collaboration with Hannah Hooper and Christian Zucconi of Grouplove. The song will be on the EP, “Monsters Calling Home: Part One,” which is scheduled for release in May 2019. Monsters Calling Home was the original name of the band. Run River North describes the EP as being about finding hope in a time of transition. Daniel Chea explains, “It’s learning to trust your own voice regardless of whatever's happening outside of you.” Alex Hwang adds, “Sometimes you surrender or give up, other times you’re letting go or lifting up. The song simultaneously laments past grievances, stays in the present moment, and ultimately moves forward with hands up and hearts open.”

“Hands Up” by Run River North

This is a live performance of "Hands Up" at The Hotel Cafe shot/directed by David Rho, with Jimmy Lee behind the audio recording. Background vocals are provided by Sarah Lee and Ryan Yoo, with Fernanda Fuentes on drums and a special appearance from Joe Chun on bass.