“Learn To Let Go” by Welshly Arms - A Song Feature 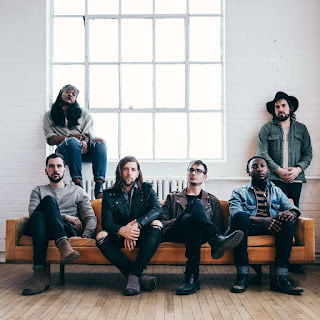 There may not be a better band at releasing thoughtful, rousing anthems. In 2017, Welshly Arms dropped “Legendary,” which created the equivalent of a localized “Big Bang” with its effect on the Indie Universe. The band from Cleveland was not an overnight success, since they formed three years earlier. But suddenly their song seemed everywhere – radio, television, sports arenas, and the trailer for Quentin Tarantino’s Academy Award-winning movie “The Hateful Eight.”

Now comes “Learn To Let Go,” which is less Bluesy, but more insightful than the 2017 hit by Welshly Arms. The lyrics (which are included below) begin by setting the scene. The protagonist is stuck, he’s in his head from the moment he wakes. Later in the lyrics, he declares the solution, “Can't free my soul 'til I…Learn to let go.” Of the new song, frontman Sam Getz says, “As an artist, it’s so easy to get stuck in mental quicksand and overthink everything. ‘Learn To Let Go’ is a reminder to get out of your own head and move on from the past, to open yourself up to the possibilities that might be right in front of you.”

The songs of Welshly Arms are significantly enriched because their members include two backing vocalists, which seems luxurious among bands who are still in their region of steep trajectory in terms of notoriety, influence and income generation. The six members are Sam Getz (guitar, vocals), Brett Lindemann (keys), Jimmy Weaver (bass), Mikey Gould (drums), and Bri and Jon Bryant (backing vocals).

Shakin' hands and my world is changin'
Down on my knees, I'm beggin'
Can't take another day

Is it over? Is it over yet?
Can I let, just let myself forget?
Everything keeps pounding in my head
Can't free my soul 'til I…

Tired
Of holdin' on tight, so tired
I'm tryna make it all alright
When will it be alright?

Is it over, is it over yet?
Why can't I let, just let myself forget?
Everything keeps pounding in my head
Can't free my soul 'til I…