Picture This – A Band Feature and Concert Opportunity

During the past two calendar years, Picture This carved its name prominently into the tree that represents European touring power. The Irish band progressed from shows at relatively small venues to performances at O2 Shepherd’s Bush London, SSE Arena Belfast, and a two-night stand at 3Arena in Dublin. Their drawing power to European concerts continues in 2019, as evidenced by an unprecedented 5-night run at 3Arena Dublin, which will occur in the last days of March. The first two nights are already sellouts. The video at the bottom of this post evidences the infectiousness of their performance energy, even in a large venue.


This year, Picture This extends its concert reach to North America. The tour includes two stops in Canada and fifteen in the U.S. One visit is to Slim’s in San Francisco (for ticket information about the SF show, CLICK HERE.) The full schedule is included in this post. 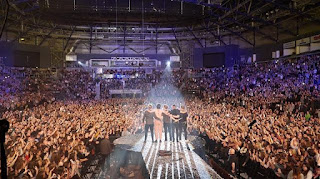 The three Soundcloud streams in this post include two from an upcoming album from Picture This. “MDRN LV,” the band’s sophomore album, will arrive on February 15, 2019, via Republic Records. In comparing the debut self-titled album to the early releases from “MDRN LV,” there is a shift. But the sound that characterizes Picture This remains intact. The differences are primarily in the production and mixing. For example, the vocals of “If You Wanna Be Loved” are clearly impacted by an increased emphasis on production effects. Regarding mixing, the percussion now has more influence on the sound, which we find as a positive in view of the skillfulness of the drumming. In talking about “MDRN LV,” the band said:
"We haven’t changed our style, we haven’t deliberately changed anything about ourselves. It’s progressed exactly how we wanted to progress. There’s a lot of different kinds of songs on the album. It’s a big spectrum of music.”
The members of Picture This are Ryan Hennessey (lead vocals, guitar), Jimmy Rainsford (percussion, vocals), Owen Cardiff (lead guitar, vocals), and Cliff Deane (bass, vocals). During late 2018, they teamed up with super producer Jayson Dezuzio to record “MDRN LV,” which at least partially explains the differences relative to the band’s first album.

“If You Wanna Be Loved”


"When We Were Young”