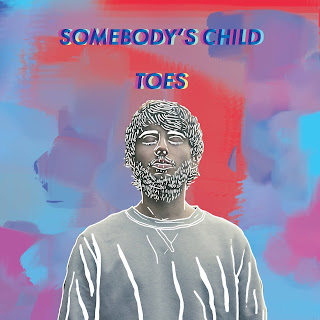 The synth in “Toes” carries the listener through elevations; it’s well-suited for a video from a GoPro camera on the head of a person wearing a wingsuit while gliding dangerously close along the slope of a mountain. The effect is invigorating. But there are other features of the song from Somebody’s Child that we find more praiseworthy. The vocal characteristics are in the all-too-seldom-heard “Goldilocks zone” of being distinctive and outside the norm, but sufficiently close to that norm so as not to be a distraction. Additionally, the numerous tempo changes are intelligently and adeptly executed. And we enjoy the deception of the first few seconds, when the tonality and processing of the guitar briefly lead to the mistaken conclusion that the listener is about to hear a song from Red Hot Chili Peppers. When the voice enters, the mistaken impression is immediately dispelled. Somebody’s Child owns its own sound.

“Toes” is not a synth single; it’s a strong song that is made more powerful by the skillful use of a synth. The song is from Somebody’s Child, the moniker of a 24-year old vocalist/songwriter in Dublin, Ireland. He seems to favor a low profile. The Facebook page of his project does not include his parent-given name or a picture in which his facial features are discernible. However, if he continues to release music with the attractiveness of “Toes,” his many fans will soon be posting pictures and videos of his performances.

Quoting press content with which we fully agree:
“Somebody’s Child looks to cement himself with the unveiling of his new release ‘Toes.’ Produced by Ross Dowling (James Vincent McMorrow, Talos, Bell X1), the track experiments with, and explores the different styles and elements of Indie Pop music. Both lyrically and melodically driven, Toes is a beautifully-arranged track that highlights Somebody’s Child’s talent for crafting songs that feel both intimate and vast, set against a blissful atmospheric soundscape."