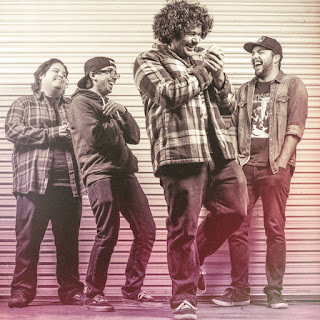 Castle Pines is the Cirque du Soleil of Indie - the band fearlessly explores different styles, exhibits skill in each, and gains more respect with each exploration. A Cirque du Soleil performance is far better live than recorded. We are confident that the same is true of Castle Pines, and continue to wait semi-patiently for the opportunity to find out.

Quoting press content:
“Woo Hoo” is absurdist realism in a conversational lyrical narrative. Relying mostly on the mundane or almost boring and banal, the song moves from the everyday to monumental events in a persons life in a satirical and comical way that is sometimes the best way to combat adversity. Partly inspired by "The Stranger" by Albert Camus, and partly based off of actual events that happened in the singer-lyricists life, the song breathes a sense of fatalistic optimism of not letting the exterior situations have affect on the promise that the sun will continue to rise.
Musically, the song takes cues from The Talking Heads, LCD Soundsystem and The War on Drugs, allowing the straightforward chordal compositions create hypnotic layering that culminate in a cathartic release in the chorus with multiple melody lines layered over each other. Compositionally, the song never rests on a minor chord long enough for it to leave a lingering effect of sadness, but rather it plays between the tonic and dominant to create something that is new but also resoundingly similar to the verse.”

We exchanged smiles and heartbreak
And stories by the parked vans with bumper stickers
And without words she said
My husband left me and I’m raising these kids on a minimum,
Three part-time jobs and shit

Well I hope your doing alright with your life
And I’m doing ok with mine, I guess
Well the last time I saw you we were thriving
Well we were doing just fine

I haven’t scene my uncle in a shit ton of years
And well you know his heart stopped and he died
And my grandmother, the one on my dads side
I have to remind her who I am every time I see her

But I hope that when his kids have Christmas dinner each year
They remember the way that I look
And I said to things to them like, the fire has a good log on it,
It's burning bright like grandma’s eyes